Food is a key driver of climate change. How our food gets produced and how it ends up on our tables accounts for around half of all human-generated greenhouse gas emissions. Chemical fertilizers, heavy machinery and other petroleum-dependant farm technologies contribute significantly. The impact of the food industry as a whole is even greater: destroying forests and savannahs to produce animal feed and generating climate-damaging waste through excess packaging, processing, refrigeration and the transport of food over long distances, despite leaving millions of people hungry.

A new food system could be a key driver of solutions to climate change. People around the world are involved in struggles to defend or create ways of growing and sharing food that are healthier for their communities and for the planet. If measures are taken to restructure agriculture and the larger food system around food sovereignty, small scale farming, agro-ecology and local markets, we could cut global emissions in half within a few decades. We don’t need carbon markets or techno-fixes. We need the right policies and programmes to dump the current industrial food system and create a sustainable, equitable and truly productive one instead.

Food and climate: piecing the puzzle together 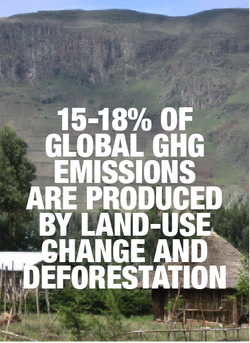 Most studies put the contribution of agricultural emissions – the emissions produced on the farm – at somewhere between 11 and 15% of all global emissions.[1] What often goes unsaid, however, is that most of these emissions are generated by industrial farming practices that rely on chemical (nitrogen) fertilizers, heavy machinery run on petrol, and highly concentrated industrial livestock operations that pump out methane waste.

The figures for agriculture’s contribution also often do not account for its role in land use changes and deforestation, which are responsible for nearly a fifth of global GHG emissions.[2] Worldwide, agriculture is pushing into savannas, wetlands, cerrados and forests, plowing under huge amounts of land. The expansion of the agricultural frontier is the dominant contributor to deforestation, accounting for between 70-90% of global deforestation.[3] This means that some 15-18% of global GHG emissions are produced by land-use change and deforestation caused by agriculture. And here too, the global food system and its industrial model of agriculture are the chief culprits. The main driver of this deforestation is the expansion of industrial plantations for the production of commodities such as soy, sugarcane, oilpalm, maize and rapeseed.