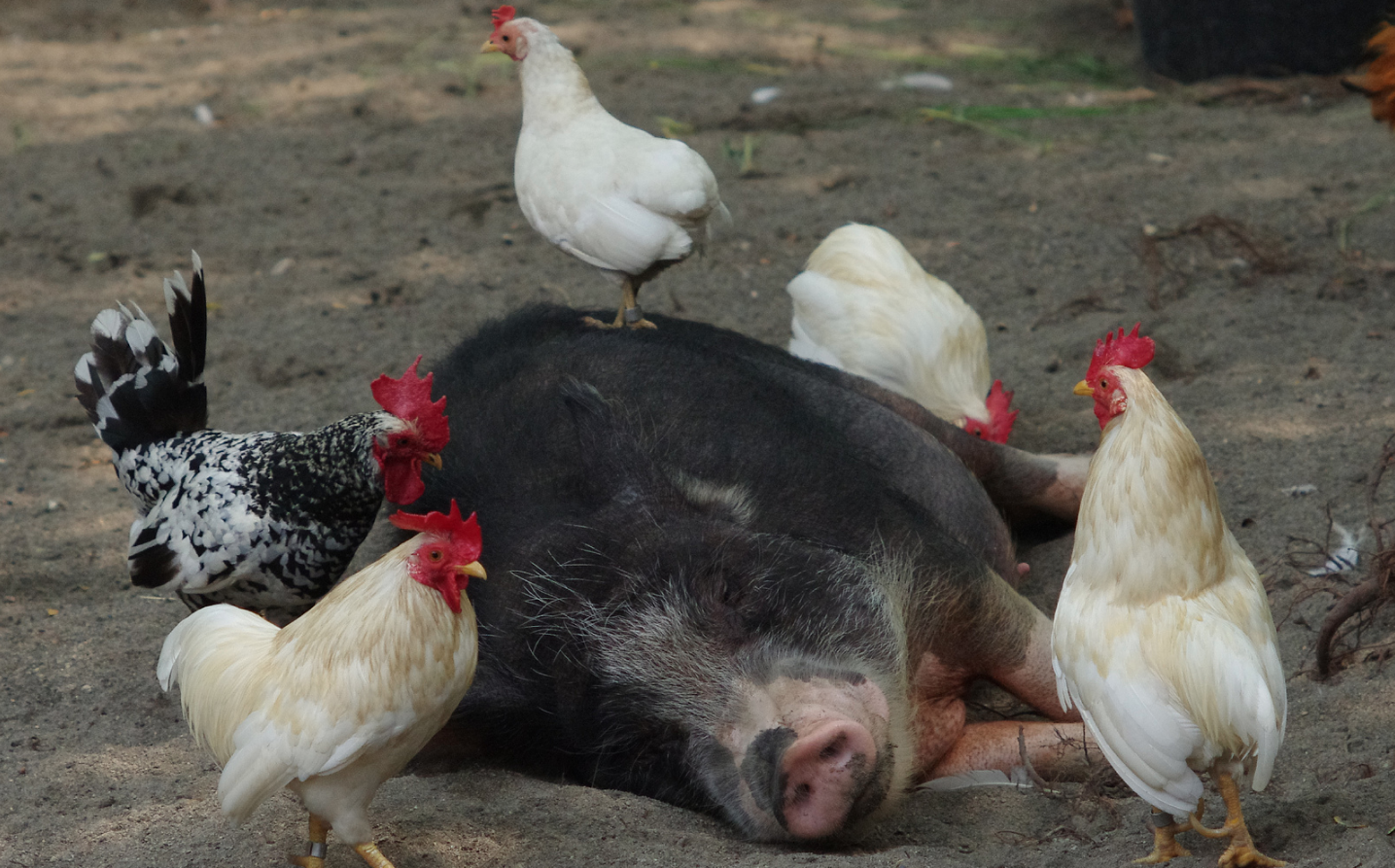 When I arrived at the farm, six mother pigs were sleeping under a tree. Surrounding them were about 50 piglets calmly intermingling with dozens of chickens.

I came here, to Bela Bela, north of Pretoria, South Africa, to learn more about a project I’d heard so much about. Run by a diverse team of individuals, this grass-fed pig and poultry project is attracting widespread attention from neighbors, cooperatives, government officials and many who are interested both in restorative grazing methods, and how to run an economically successful farm.

What I learned from my visit with the operators of this innovative project was this: Pigs and chickens make great companions. And when fed a natural diet, and properly managed, they regenerate degraded lands, require minimal medical intervention and use of antibiotics, provide a good income even in during times of drought, and create opportunities for synergy with other local businesses.

From cattle to pigs and chickens

The Bela Bela pilot project is a “necessity is the mother of invention” story. The team here used to raise cattle on the 40-hectare (ha) (about 100 acres) farm. But then circumstances forced them to give up on cattle. The land simply could not sustain an economically viable number of cattle because of its size and because of the degraded state of the land and vegetation. It was impossible to rear cattle herds without massive external inputs of purchased feeds

So the owners decided to purchase a herd of nine pigs.

A short 16 months later, the herd has grown to 500—about 200 adult pigs and 300 followers—who forage side by side with chickens, which have proven to be good companions.

Managing the pigs is as simple as keeping them in three herds. The farm team moves the herds daily, using “tractors.” Moving the herd takes about 30 minutes per herd, and the pigs are counted through a race, which is a portable metal structure which funnels the pigs through a narrow (roughly 2 meters long) section for easy counting, inspection and sorting and moving.

Sows that are ready to farrow are isolated and kept behind the main herd, until their piglets are weaned. Weaned piglets move to the “nursery school” herd—which is where I found 200 piglets happily eating aloes the day I visited. The aloes, a favorite food for the piglets, also serve as a natural de-wormer.

Creative watering points provide wallows for the pigs who enjoy a mud bath just as warthogs and wild pigs would in the wild habitat. The mud provides the best natural dip, eliminating the need for dipping, which is the term used to describe the application of chemicals used to kill external parasites, mainly ticks, on livestock. Dipping has become routine on most farms and is a glaring example of symptomatic treatment using linear thought processes, instead of addressing the root causes of challenges faced by farmers. Routine dipping leads to livestock becoming dependent on the chemicals applied at very strict timings.

Good for the environment and the animals

Previously, the land at the Bela Bela farm had been exposed to high doses of herbicides which had created large swaths of bare, exposed soil. But the introduction of pigs and chickens is gradually restoring the land’s biodiversity.

Some parts of the farm may take time to fully recover from the impact of previously used degenerative farming practices. But so far the team here is finding that proper management of the pigs and chickens can help repopulate the land with new species of grass, earthworms and insect activity. As it turns out, the hoof action of pigs, and the soil-scratching activity of chickens hunting for insects, break the soil’s hard surface. This improves the soil’s permeability, which in turn encourages the regrowth of natural vegetation.

Combining pigs and chickens is also proving to keep disease to a minimum. Farm Manager Anderson Mutasa says that it is critical to spend a great deal of time with the animals, observing both the environment and the animals, in order to be able to read the signs indicating that either is unwell. Mortalities are low and at a level to be expected as pigs adapt to a new environment. The ethos on this farm is that treating with antibiotics only masks the symptoms of the diseases and does not breed a herd that is well adapted to their environment. Consequently, there is no specific breed of pigs found in this herd, only those that are adapted to this environment. In this case, it is the darker skinned pigs that are proving to be the best adapted.

Profitable for farmers and the local economy

Pigs are not only fast land regenerators, but they also provide a quick return on investment. Because none of the team members had any prior experience raising pig, there were some initial costs associated with the learning curve. But what the team has since learned is that raising pigs and chickens together, in harmony with the environment, presents an excellent opportunity to make good profits at almost no cost at all. Unlike big livestock, such as cattle, pigs have lower investment costs. The animals breed 2.5-3 times a year with an average of 6-7 piglets per pig.

The team here describes their work as “low cost but high skill farming” because the managers must invest time in observing and understanding the environment and animals they are working with, in order to help the animals adapt to the their environment. But they do not spend money on expensive inputs, such as fertilizers and pesticides.

While the farm prospers, so do other local businesses. Waste from local dairies and hatcheries is recycled as feed for the pigs. For instance, waste from the production of yoghurt and cheese provides food that is rich in probiotics, which helps maintain the pigs’ gut health. And unfertilized eggs from a nearby hatchery, along with discarded vegetables not suitable for sale at the local market market provide excellent protein and other nutrients for the pigs.

The project at Bela Bela provides another benefit to the local community: education. As word spread about the project’s success raising pigs and chickens without commercial feed, the farm soon evolved into a teaching farm. Fortunately for farmers wanting to venture into free-range pig and chicken farming, the team at Bela Bela is happy to share experiences and knowledge. They have already been approached for training by a cooperative of about 350 households in the area, and they helped set up the pig and poultry project at the Africa Centre for Holistic Management (ACHM).

This project is showing huge potential for sustainable and scalable farming. It is accessible to entry-level farmers, and is particularly well suited for community projects because of quick returns at low cost. Unlike big livestock like cattle, pigs have lower investment costs. The animals breed 2.5-3 times a year with an average of 6-7 piglets per pig.

Many new collaborations are on the horizon and we wish them well and look forward to hearing more about their sure success in the future.

Precious Phiri is the Zimbabwe-based Africa coordinator and steering committee member of Regeneration International, a project of the Organic Consumers Association.