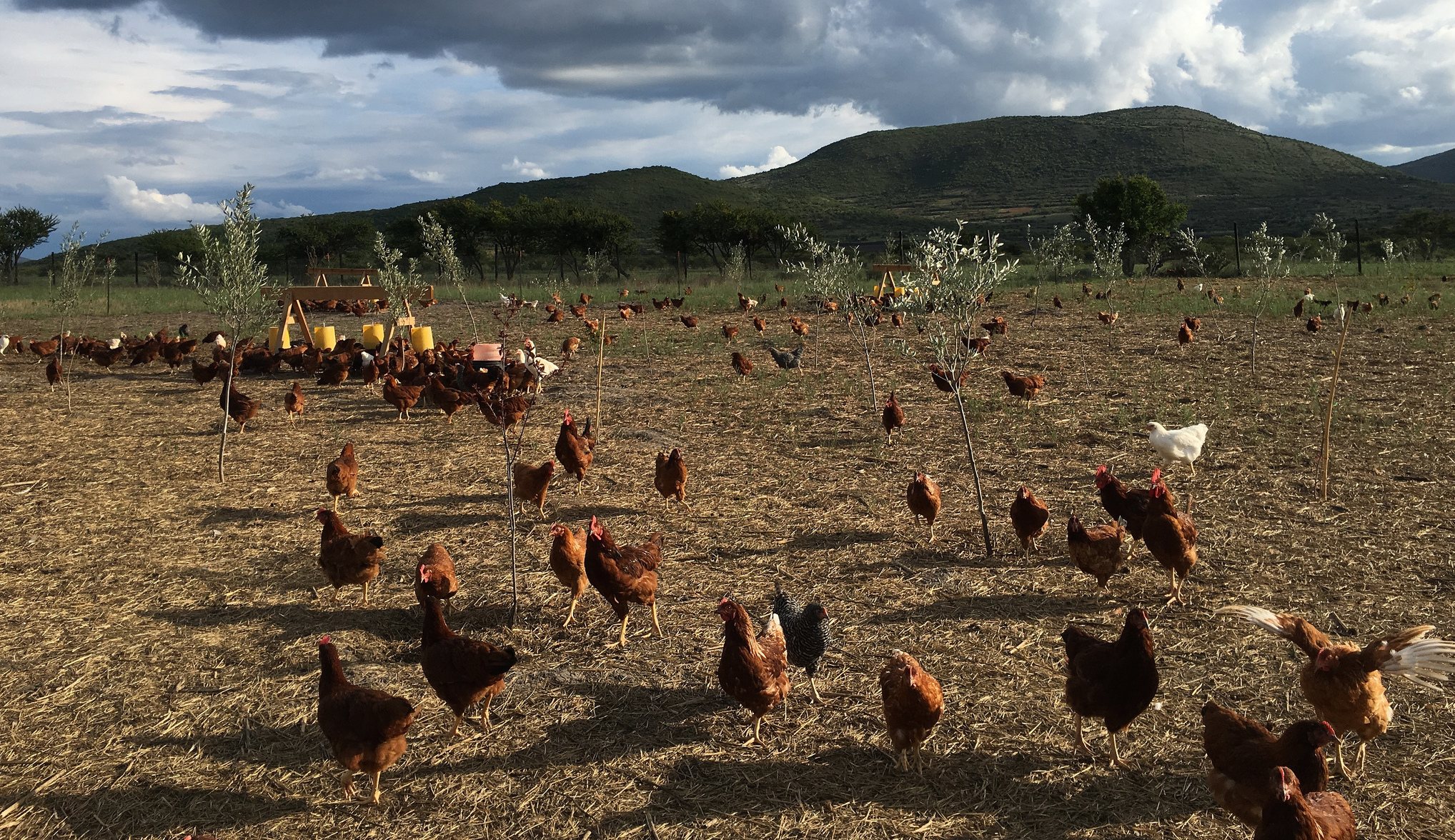 If you’re familiar  with the groundbreaking book “Cows Can Save the Planet,” you understand the role cattle can play in restoring the world’s soils and reversing the impacts of climate change.

But did you know that chickens, when raised in regenerative agroforestry-based systems, are proving to be key players in the regenerative revolution, too—especially when it comes to empowering the world’s 500 million small farmers?

In order to meet the world’s growing demand for chicken and eggs, the poultry industry has mercilessly worked to cut costs and increase supply. They’ve succeeded, but only at the expense of farmers, consumers, chickens and the environment. The current factory farm model of poultry production is unstable, toxic and heavily reliant on antibiotics, feed subsidies and abusive labor practices.

Luckily one man has dedicated his life to designing an alternative to toxic factory farms that can not only exceed current and future demand for healthy and humanely produced chicken and eggs, but also empower small farmers and restore  rural communities, local ecologies and our food system.

Regeneration International recently talked chickens and regeneration with Reginaldo Haslett-Marroquin who, as Chief-Strategy Officer of the Main Street Project, is developing a poultry-centered regenerative agriculture system and leads a team that is changing how small farmers are producing food around the world.

Today, Reginaldo is leading the team, the strategies, and designing the processes to take the Main Street Project’s poultry-centered regenerative agriculture system to large-scale. Having spent the past seven years perfecting the system with Latino migrant farmers in Northfield Minnesota, Reginaldo and his team at the Main Street Project are in the process of adapting and expanding their model for farmers in other U.S. States, Mexico and Guatemala.

(Watch the full interview above or on RI’s Youtube Channel)

RI: How did you first got involved with regenerative agriculture?

Haslett-Marroquin: I really came into this as a kid. I grew up in the rainforest with my brothers and sisters. When we started our farming system in the rainforest we did what everybody else did—you cut down the forest, you burn it and plant corn, black beans, soy beans and squash and all that. We only did it once, that I remember, before my dad said we are not going to make it, this is going to degenerate the ability of the soil to feed us. So we created a whole new system amidst everyone doing the opposite. And that is how I as a kid I became very interested in the biodynamics of these new ways of producing food, and later on, professionally learn about how much more efficient the regenerative systems our family developed were. That’s really where my beginnings were.

The [regenerative poultry] system that I am working on came as a result of trying to adapt to the current challenges that we are facing with climate change, with poverty, especially this almost unbelievable point we have gotten to with food security, even though almost every community in the world has the capacity to be food secure. Why have we not done like what we did growing up? We were poor, yes. But we were never food insecure. And now we have these massive institutions talking about food insecurity as the purpose for being while really food insecurity has continued to increase. That’s really what got me thinking. Is there a more strategic and simple way of thinking about it? And so poultry is an entry point that deals with those things head on and allows us to do larger-scale deployment of small farming systems and do them using the principles that I learned as a kid.

RI: So why poultry, is this something that was integrated into your family’s agricultural system in Guatemala?

Haslett-Marroquin: Yes and if you look at the whole world there is hardly any place on earth or a farmer on earth that doesn’t have some sort of familiarity with some kind of bird. Whether it’s pheasants, turkey, or chickens and even pigeons in Vietnam for example. Birds are the one type of livestock that unites  us globally. So if we are going to create a global movement that actually addresses some of these fundamental issues, and we are going to do it from the standpoint of regenerative agriculture—meaning socially, economically, and ecologically regenerative, highly scientific—we have to start with one thing that is common to most of the world. And that’s what chickens do.

RI: How does this system regenerate local economies and societies? What effect does it have on the supply chain?

Haslett-Marroquin: Let’s put it this way. The purpose of this is to produce a new system from which we can reengineer the way we grow and distribute food. And the way we supply those value chains and supply chains so that we can transform the kind of food consumers can have access to and transform the way farmers interact  with each other.

The economic regeneration of a system depends on the ripple effect of all of the economic transactions so that extraction does not happen. Rather than extraction, there is flow and balance of resources.

Ecologically, it is actually a matter of design. If we are going to design efficient systems, we have to work with the ecology. By restoring and regenerating the ecology this is how we achieve the economic returns that we seek. By organizing the economic returns so that they flow in a balanced way, we keep them from getting extracted from the families that need them to sustain and regenerate and continue to regenerate the system over time.

As you do those two things, the economic and the ecological, and achieve high levels of energy transformation efficiency, you also create  the social interactions which allow it to regenerate the ability of people to be with each other and learn more about how to live together. That is what is degenerating, our ability to understand who we are within the larger context of the world and food.

RI: Why does the world need this model?

Haslett-Marroquin: As you think of what conventional agriculture has delivered us, we see a lot of health problems on the consumer side. As a consumer, I don’t want to continue to purchase these cheap foods that are making all of us sick. Food-related diseases are huge and there is no need for it, because we can develop a new system.

We always start with the question “what if?” In this case, what if we don’t even need cheap food? What if the idea of cheap food is so misunderstood that it is more expensive at the end of the day because of the consequences of consuming it? What if what we really need is a reconnection between the consumers and farmers so that we can reengineer how food actually happens from the farm to the table, and how that energy gets reintegrated back into the system?

Just like consumers, farmers are suffering from lack of opportunity, ownership and control, access to resources, new technologies, because all of the ownership and control of the current food system is concentrated in the hands of a few powerful multinational corporations. So consumers need these systems because we need healthy food, accessible to everyone. And farmers, small farmers especially—over 70 percent  of the food in the world is producer by small farmers with under 5 hectares of land—this allows us to bring them back into the equation at a larger scale with more power, greater ownership and control, and to connect them more directly back to consumers. We need to regenerate the social connectedness between producers and consumers so that we can rebuild that trust and confidence that was lost as we gave up the ownership and control.

RI: How does the regenerative poultry project synchronize with the intentions of the 4p1000 initiative. And what opportunities does the initiative bring for Main Street Project and more broadly in Mexico and Latin America?

Haslett-Marroquin: Here’s how we connect this opportunity. 4p1000 is an ecological imperative. The idea of bringing back 4 for every 1000 particles of CO2 from the air into permanent storage and doing that on the basis of soil restoration is critical. But really that shouldn’t be the end goal. The end goal should be beyond that. When you think of just bringing that carbon back, think about why it was out there in the first place. Because there was irresponsible management of our soils. If we just bring it back because we built an economic opportunity for corporations to bring carbon back into the soil, we’ve lost again. Because the minute we stop paying those corporations to come up with solutions to problems they created in the first place, we are back to square one.

What our model  does is bring ownership and control of the 4p1000 initiative to communities. That is how we are going to win in the long term. That’s what is going to make it permanent and regenerative and sustainable and all of those things that we keep saying we want from this initiative.

Of the millions of farmers in Mexico who own less than 5 hectares [of land], if we took 5 for every 1000 for example, we could deploy enough production to supply 100 percent  of the eggs that Mexico consumes right now, totalling around 15,700 production units mimicking the one we have in San Miguel de Allende (Granjas Regenerativas). This allows us not only to restore soil and deliver on the 4p1000 initiative, but also allows us to do it on the basis of community engagement, rather than making it another business opportunity for the carbon traders. This is where we bring it to earth, so to speak, back to the soil.

RI: So you’re putting the power back in the hands of the small farmers.

Haslett-Marroquin: That would be the idea. If we don’t do that, we are really not going to change the way things are. What created the problem in the first place is greed, lack of interest and respect for nature. The folks who did that, the corporations who are responsible for that, it is not in their DNA to do otherwise. To think that somehow they are going to solve this problem is really naive. We have to do it on the basis of re-distribution of the ownership and control of the end result.

I believe in this case what we have done, is we’ve created a  very nice enterprise opportunity and design for small farmers, a way for them to get into this business in alignment with regenerative principles, and at the same time meet  all of the standards of the 4p1000 initiative.

I am happy that Mexico signed the 4p1000 agreement. This gives us a moral imperative. It gives an argument to be made for the fact that now Mexico has to deliver. It is not legally binding. Obviously these are voluntary commitments, but it does create the environment under which we can start this conversation about how do we change for real.