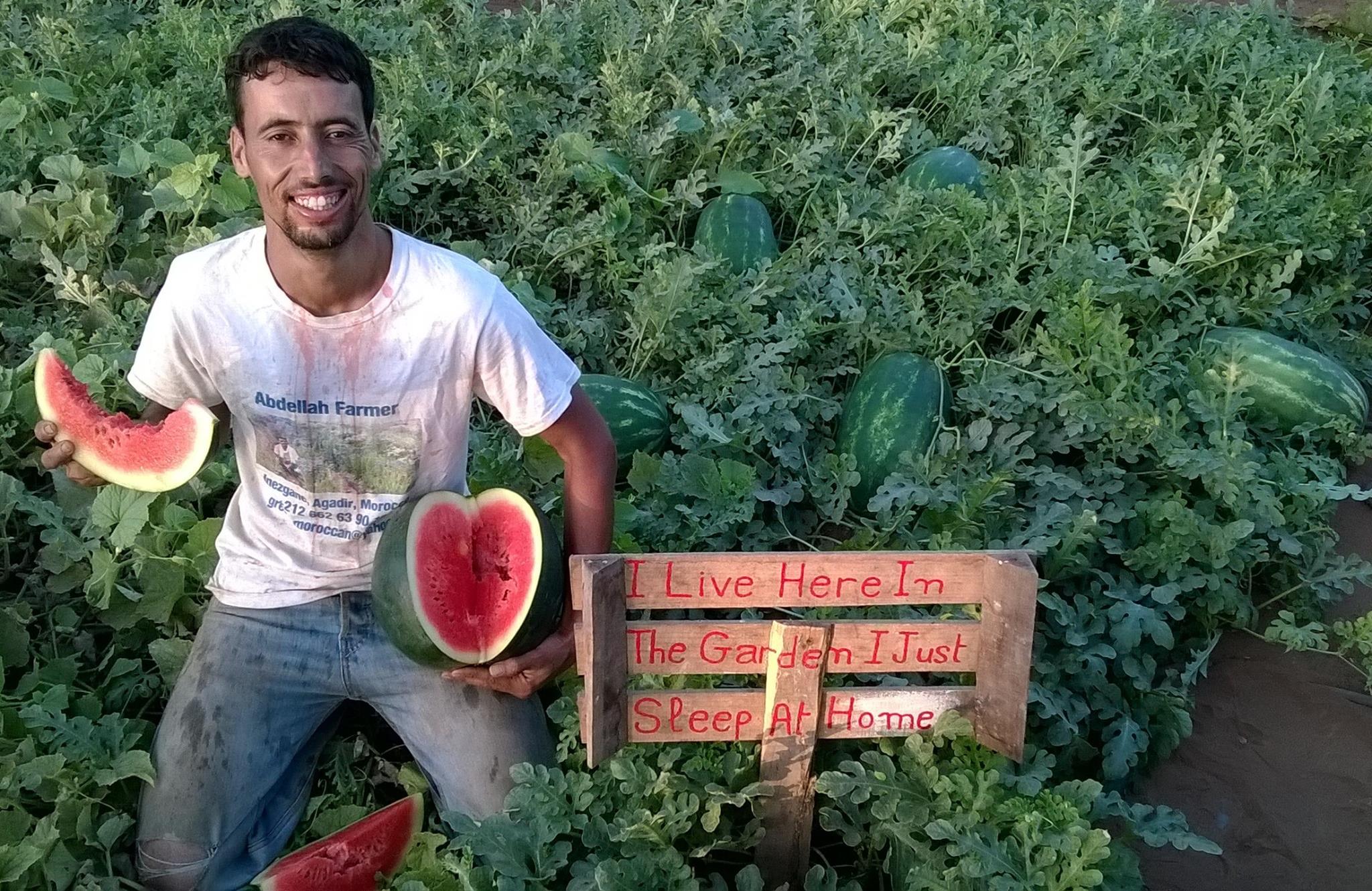 Abdellah Boudhira, a third-generation farmer in Morocco, has experienced first-hand the downside of conventional farming. Boudhira watched his family farm suffer for decades under the false promises of higher yields, combined with the high costs of chemical inputs like synthetic fertilizers and toxic pesticides.

In 2012, Boudhira began his farm’s transition to regenerative agriculture in order to save his family farm. Restoring his land’s soil, rescuing local seed varieties and rebuilding a market for local organics in Morocco has been challenging, Boudhira said. But the decision was the right one, he said, after witnessing the damage expensive hybrid seeds and toxic chemicals had inflicted on his most precious resource—soil.

Agriculture is the backbone of Morocco’s economy. But Morocco’s farmers, like so many farmers in other parts of the world, are suffering from recurring drought. Still, according to a 2014 GRAIN report, small farmers like Boudhira are producing 70 percent of the world’s food on less than a quarter of all farmland. And they are producing this food despite the challenges of dwindling natural resources, increasingly extreme and unpredictable weather patterns and the economic impacts of rapidly expanding industrial farms that are crushing local food systems.

Regeneration International invited Boudhira to share his story on November 18, at an event we helped organize for the upcoming COP22 Climate Summit in Marrakesh. Read the interview we conducted with him to learn more about his farm, his transition to regenerative agriculture and his plans for the future.

Regeneration International: Tell us about your story, how did you get involved in regenerative agriculture?

Abdellah Boudhira: I switched from conventional to regenerative agriculture for many reasons. As a small farmer who works my land by myself I needed to avoid and protect myself from chemicals, which I used to spray nearly four times a week. The second reason is because our land became exhausted from growing only tomatoes year after year. I’m a specialist in growing tomatoes and for more than 20 years my father only grew tomatoes in the same place and eventually our land became exhausted from it. Soil diseases like nematode and fusarium developed and affected the productivity of our tomatoes.

The third reason is to avoid debt to seed suppliers, chemical companies and synthetic fertilizer companies. If I kept working the same “conventional” way, I would always be indebted. The fourth reason is that I wanted to change the way I market my produce. I wanted to sell directly to families, directly to the “consumer,” so that I could benefit from the real advantages of growing organic food. I wanted to find and maintain customers who seek healthy food and care about what they eat. When farmers sell to wholesale markets, there are intermediaries who don’t care how the produce is grown in the field. They only care about the quantity and look of the produce. Their only goal is making money. There is no interaction between farmers and consumers. Farmers sell their produce at low prices while the consumer buys it at a high price because the same produce passed through the hands of three to four middlemen before it reaches the consumer.

AB: Before hybrid seeds were introduced to Moroccan farmers, farmers were saving their own seeds and traded them with each other. For example when we save seeds from heirloom tomatoes we give some to our neighbor farmers and they give us green beans, squash, carrots, onion seeds, so no one ever purchased seeds during that time. But when hybrid seeds came and some farmers purchased them, because of the high yield they gave and the uniform size and color and look they have, their popularity and demand increased. Eventually all farmers were growing hybrid seeds and lost the seeds that had been passed down to them by generations of farmers. Years later more hybrid seeds were invented to resist diseases as such TMV whitefly, fusarium, verticillium wilt and nematodes. These seeds were introduced here by some well known international seed companies as such Royal Sluis, Vilmorin, Deruiter Seed, Syngenta. This caused the price of seeds to rise and the price has kept rising, and now tomato seeds are more expensive than gold here in Morocco.

AB: Yes 1kg of tomato hybrid seeds is expensive than 1kg of gold here in Morocco.

RI: What other challenges do you and other farmers in your region face?

AB: The first challenge is drought, desertification and big agriculture which have depleted the underground water table. In the early 1960s my father was pumping water from a well 8 meters deep and today we pump water from a well 120 meters deep. Secondly, due to climate change, the majority of the year the climate is now warm and dry, which creates the perfect environment for harmful insects to breed quickly. Tuta absoluta, whitefly and another virus that appeared this year called New Delhi which attacks cucurbitaceae are some examples.

The emergence of these pests has forced big farmers to grow crops that are susceptible to these viruses in isolated greenhouses. Small farmers simply cannot afford to build these types of greenhouses, so they’ve shifted to growing easy greens as such lettuce, beets. So small farmers have flooded the market with the same produce because they have no alternatives.

Another challenge is that the land is tired because farmers are not rotating their crops and they’re using harmful chemicals to kill soil diseases. Finally, both small and big farmers have such high debt, every year we hear that some farmer has to sell his property.

I am a farmer by choice. My soul gets inspired when I touch the soil and water and when I plant seeds and watch them grow.

RI: What tools are you using in response to these challenges and to build your farm’s resiliency in the face of climate change and extreme weather?

AB: I am a farmer by choice. My soul gets inspired when I touch the soil and water and when I plant seeds and watch them grow. Today it is more difficult to grow things than it was years ago. Since 1998 I’ve felt that there is something abnormal occurring in farming systems. Farming needs more care and attention and requires more planning than it used to.  In order to sustain myself as a farmer I had to change the way I farm and the way I market my produce. Now I grow different types of vegetables, herbs and greens in a rotational program. This builds soil fertility and protects against soil diseases. Growing biodiverse crops makes my farm more resilient in the face of extreme weather or pests. My farm was less resilient when we only grew one type of crop. For example wet weather can cause white powdery mildew on squash but not on onions, radishes, tomatoes and green beans.

I also make compost from my garden waste and aged manure and mix it in the soil to build fertility. I obtained heirloom seeds and now save my own seeds that I save for the next season. I don’t have to buy expensive hybrid seeds anymore.

I focus on controlling illness in plants when it first begins, because it’s easier to control than to treat. For pest control I use chili solution to burn cutworms as they hatch from the moth eggs, I spray ashes on cucurbitaceae leaves to reduce the development of white powdery mildew, I practice what is called intensive gardening so to get good quantity of food in a limited area of land. This also saves me land and reduces weeding. And for plants that need partial sunlight, I grow them beside tall plants to give them shade in the afternoon. This year I started to look for customers in the city of Agadir to buy my produce so I can keep improving my farming.

RI: What advice do you have to other farmers seeking to increase their farm’s resiliency?

AB: The best advice I have for farmers is to open their minds and be open to changing their practices. I shared my ideas with some young farmers here but I’ve found they’re afraid of new ideas. They’re stuck in their ways. 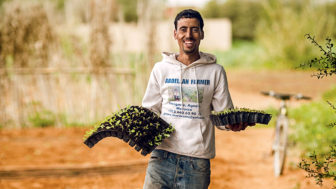 You know, farmers are close to nature and in nature everything teaches you lessons, but unfortunately not everyone learns. A real farmer who loves his land and finds joy in working it, a farmer who creates life and food that nourishes both body and soul, a farmer whose heart is firm no matter what challenges they face, this farmer will find a way.

Farmland is farmer potential. A farmer should handle his/her land with care. Farmers should run away from anything which labeled wear a muzzle, gloves, or glass before using it. Farmers should stay away from banks that offer to provide loans. Farmers should practice rotational growing. Farmers should revise their marketing strategy to create a better and honorable ways to market their produce.

RI: Tell us about your vision for the future of your farm?

AB: My vision for the future of my farm has great promise. I am very pleased with the results I have achieved after many years of hard work, but what looks unclear to me is the future of our farm because our land is shared between our relatives. I farm on my father’s share of land. The neighboring land I rent will expire in 2018. I don’t know if my landlord will extend it… Anyways let’s be optimists. A farmer should always be an optimist or he won’t be a farmer anymore.

RI: The Lima Paris Action Agenda (LPAA) states “agriculture is a key sector to achieve both food security and the 2 degree target,” how do you feel Morocco fits into this context? 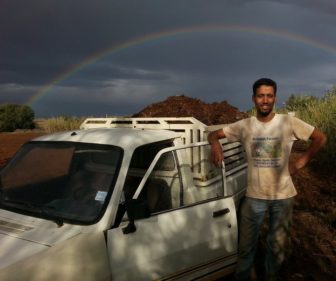 AB: Without a doubt agriculture is the key to achieving food security, but we must practice an agriculture that regenerates natural resources, water and soil fertility.

In Morocco there are only two regions that feed the entire country. These two regions even supply Europe, Russia, USA, Canada and China with citrus and other vegetables. Due to the compaction of the soil by big agriculture in these regions,, water tables have depleted by almost in half of one region. Here, where I live, soils are also degrading. Without heavy use of synthetic fertilizers, farmers can’t get the yields they need in order to keep up with growing input costs.

There is an abundance of water and lush land in the north of the country but people there made the choice decades ago to immigrate to Europe and to the big cities in Morocco instead of working on the land. Now it is hard to convince young people there to become farmers. Farming is not an easy job especially if you are small farmer.

RI: How can consumers help to support the growth of regenerative agriculture in North Africa?

AB: In order to encourage farmers to grow healthy food in a regenerative way, consumers must buy products from farmers at a price that will allow them to farm that way. Local farmers need that support so they can keep their land and keep working their land instead of selling it to move to overcrowded cities.