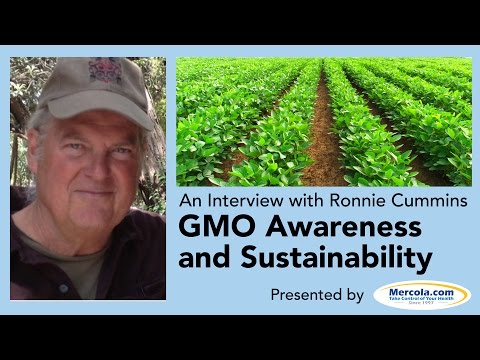 Our annual GMO Awareness Week is upon us, and in this interview, Ronnie Cummins, founder of the Organic Consumers Association (OCA) details the current state of the opposition to genetically modified organisms (GMOs).

We first met about six years ago, when we collaborated to create the direct ballot initiative to label GMOs in California.

A lot has happened since then, including the passing of what’s colloquially known as the Deny Americans the Right to Know (DARK) Act, ironically misnamed “The Safe and Accurate Food Labeling Act” — this despite a full 90 percent of consumers supporting mandatory labeling.

The Trump administration has also selected or appointed notorious cheerleaders for GMOs and factory farms to his cabinet — Mike Pompeo as head of the CIA, Sonny Perdue as USDA Secretary, and Rick Perry as Energy Secretary.

Meanwhile, his Tea Party allies in Congress have called for the abolition of the entire National Organic Program!1

On the upside, in 2016 we saw, for the first time in nearly 20 years, a decrease in the amount of genetically engineered (GE) crops grown around the world, in terms of acreage.

As noted by Cummins, “This represents the fact that this technology is failing, in the sense of superweeds and superpests are popping up all over the world.” In the U.S., three-quarters of farmers growing GE crops like soybeans, corn or canola are having problems with these herbicide- and pesticide-resistant pests.

Market Rejection of GMOs Has Grown

Even more importantly, consumers around the world have become aware of the many problems associated with GE crops and the toxic herbicides and pesticides used on them, and do not want any of it on their plates.

In other words, the market has started rejecting GMOs, and that’s what we’ve been fighting for all along. Nothing can or will change unless consumers apply pressure in the form of refusing to buy GMOs.

In the European Union (EU), which is the biggest agriculture market in the world, few if any GMOs are found on supermarket shelves.

In the U.S. — despite industry spending hundreds of millions of dollars to manipulate market preference — about 40 percent of Americans still believe GE foods and GE ingredients are dangerous. Another 20 percent are unsure whether GMOs are dangerous or not.

“This combination of consumer rejection and, basically, Mother Nature’s resistance, has caused a drop-off,” Cummins says. “I think this is the beginning of the end of at least this generation, the first generation, of GMO crops.

Now, industry is saying, ‘Don’t worry about the fact that we’re using more and more toxic pesticides and herbicides … Don’t worry about these pests spreading across the fields. We’ve got a new generation of GMO crops where we can just do gene editing.

We don’t have to pull some DNA from a foreign species and haphazardly splice it into a corn or a soybean crop.’

But the bottom line is that this gene-splicing and this so-called new gene editing are unnatural processes that disrupt the genetic structure, the natural workings of living organisms. These aren’t going to work either.”

Organics and Grass fed Are Increasing in Popularity