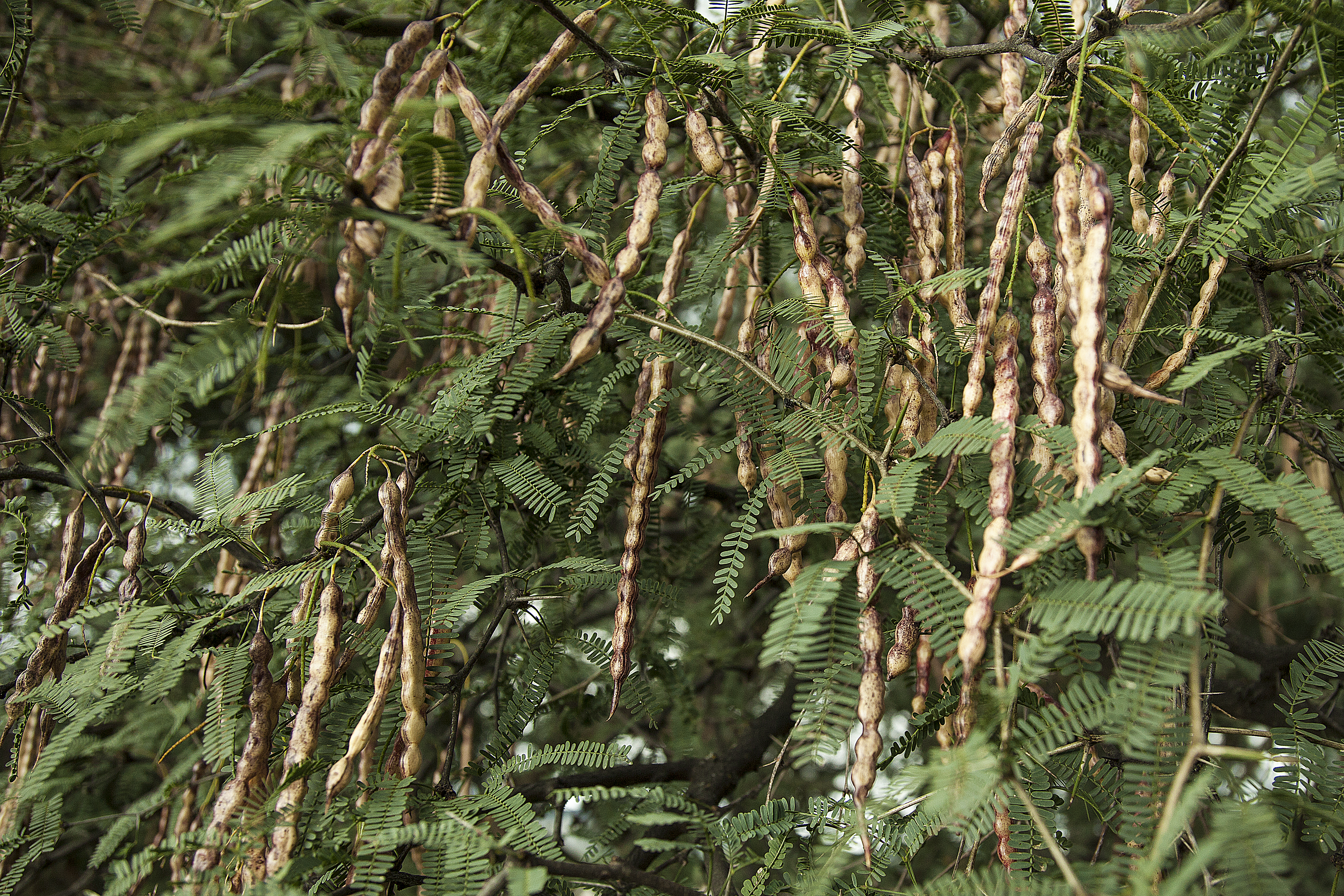 Probably no other plant has played such a vital role in the ecologies, and among the human populations of the arid and semiarid regions of Mexico and the US, as the multifunctional mesquite tree. This extremely resilient and adaptable tree has a rich ethnobotanical history and holds great potential to become a major staple food crop for drylands throughout the world, while supporting climate change mitigation efforts and providing food security in the face of desertification, water stress, and climatic instability.

The Ecology of Mesquite

Mesquite is a nitrogen-fixing member of the legume family in the genus Prosopis. This genus includes around 44 species, distributed mainly throughout the Americas with a few species from Africa, the Middle East, and the Indian subcontinent. Some species native to the American continent are now naturalized around the world after being introduced either as a source of livestock fodder or as part of erosion control programs. 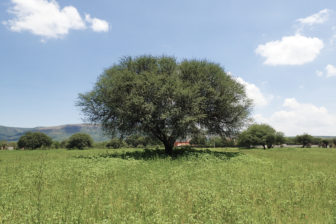 Old mesquite tree (P. laevigata) in the middle of a recently abandoned field in Mexico

The wide climatic range of Prosopis extends from fully tropical to warm temperate. Most species are able to thrive in extremely high temperatures and some of them can withstand temperatures as low as -20° C (-4° F).

With roots that can reach up to 50 meters (164 feet) deep and that are colonized by nitrogen-fixing bacteria and symbiotic fungal allies, mesquite has an extraordinary ability to thrive in very harsh environments and withstand long periods of drought. In general, Prosopis can thrive in regions that receive as little as 9-12″ of average rainfall, although when other sources of moisture are available, it can grow in hyper-arid regions that receive virtually no rainfall like the Atacama Desert or the Arabian Peninsula.

This multipurpose nitrogen-fixing tree is able to grow in extremely degraded soils and can tolerate alkaline soils with a pH as high as 11. In some extreme cases, like on the semiarid Pacific coast of Mexico, Prosopis juliflora grows right on the shore of coastal saltwater marshes.

The pods and leaves of most Prosopis species, both containing a high percentage of protein and other essential nutrients, provide a vital source of food for wildlife. Mesquite is also considered a nurse plant in the ecosystems where it grows, since many native plants are only able to establish under the microclimate that the mesquite provides.

The presence of mesquite and the leaf litter that it produces helps to increase soil fertility and lowers salinity. Soil particles and debris of organic matter are usually retained and fixed by its roots giving Prosopis an important role in erosion control. Studies done by Richard Felger, a world Prosopis expert, estimate that some species of mesquite can sequester as much as 1.2 to 8.94 tons/ hectare/year of carbon, depending on the climate and the soil type.

Traditional and Current Uses of Mesquite

The highly nutritious and sweet pods of the mesquite have been one of the most important staple foods of the native peoples of the Americas for thousands of years before corn was domesticated. The oldest archeological evidence of the use of mesquite as food dates from 6,500 BCE from the Tehuacan Valley in Oaxaca, Mexico. 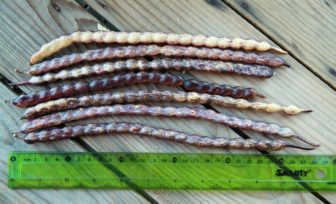 The fruit produced by Prosopis species are legume pods which contain, depending on the species, 7-22% protein, 11-35% soluble fiber, and as much as 41% sugar content. The sugar is mostly fructose, which humans can process without insulin. The mesquite pods have a low- glycemic index and contain lysine and other essential amino acids. They are also a good source of potassium, manganese, and zinc. Studies done by Richard Felger, estimate that one hectare of mesquite can yield between 2-10 tons of fresh pods, depending on climate and species.

During the harvesting season, indigenous people would gather huge quantities of pods. Fresh pods were commonly chewed, and are still consumed raw by children in rural areas of Mexico. The majority of the harvest was either sun-dried or roasted on hot coals. The pods were then ground into a meal using mortars and pestles or large wooden poles. This meal was sometimes sprinkled with water to make dense cakes that, once dry, could last indefinitely, providing vital sustenance during times of drought. The meal was also mixed with water to make a refreshing sweet drink or was fermented slightly.

Apart from being a prime source of food, native populations used the mesquite wood for fuel, tools, and construction, and a variety of plant parts were used in medicine.

Few native populations in northern Mexico and the southwestern US still rely on mesquite as a source of food. Human uses of processed pods have declined and traditional knowledge about the processing and consumption of the pods has, for the most part, been forgotten. This was a result of cultural colonization and the introduction of alternative foods like wheat, oats, and barley, as well as the widespread deforestation of mesquite savannas and woodlands that came with land clearance for agriculture, industrialization, and mining.

The main present use of Prosopis worldwide is for fuel. In many arid regions, where few other trees grow, mesquite is often the most important source of firewood for rural populations. An important industry exists in both Mexico and the US around the production of mesquite charcoal for barbecues and smoke wood.

Mesquite wood is commonly used for high-end rustic furniture and cabinets. Although the felling and milling of mesquite is now under regulation in Mexico, illegal logging keeps pressure on the few last stands of old growth trees and sustainable forestry programs involving mesquite are virtually non-existent.

The flowers of Mesquite are an abundant and high-quality source of nectar and pollen for apiculture in all regions where species are native and, in several areas, where it has been naturalized. A good example of this is Hawaii, where one of the world’s most expensive gourmet honeys, Kiawe white honey, is produced from the flowers of the introduced Prosopis pallida. Mexico, the world’s largest exporter of honey, also derives much of its production from the 9 species of Prosopis that grow there. 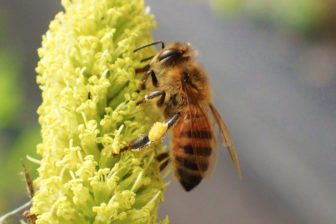 Honeybee foraging a mesquite flower during the dry season.

Mesquite is also known for its value as an animal fodder. The palatable leaves contain between 11-18 % crude protein and the trees maintain green foliage when most other vegetation has dried out. The pods also constitute a significant source of feed for grazing animals. Since the seeds germinate readily after passing through the digestive tract of grazing animals, these animals provide the most important means of mesquite propagation. In many regions of Mexico, mesquite pods are harvested, stored then sold as animal fodder in the drier months of the year.

The Mesquite Renaissance in the Central Mexican Plateau

In 2016 I co-founded the Mexquitl project with the objective of starting a regional mesquite flour operation that would support the renaissance of mesquite as an ecologically and culturally appropriate staple food.

The fresh pods are wildcrafted by local communities that conserve some of the last healthy stands of mesquite woodlands in the area. The pods are selected and hand- harvested straight from the trees by women who get paid the equivalent of $1.40 USD per Kg of fresh pods. As a reference, the current price of mesquite pods for livestock fodder in the region is around $0.16 USD/Kg and the price of corn around $0.22 USD/Kg. As an incentive for these women to bring back mesquite into their own diets, we offer free milling of unlimited amounts of pods for self-consumption. 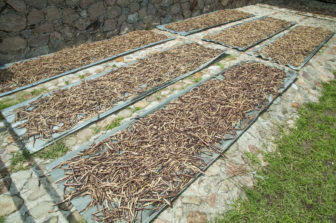 Pods being sundried for 2-3 days on corrugated metal sheets.

All the harvest goes through a full inspection to make sure all pods are free from mold before they are spread on sheets of corrugated metal to be sun-dried for 2-3 days. During the drying process, the pods are stored in airtight containers overnight as well as during cloudy weather. Once fully dried, pods can be stored safely until milling time.

The dried mesquite pods are passed twice through the hammer mill using two different mesh sizes in order to come up with a fine flour texture. We then package and label the flour before it is sold at health food stores in central Mexico. 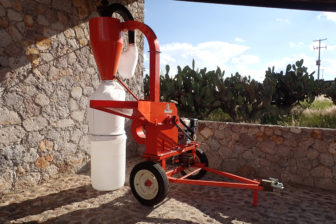 One of the project’s goals is the creation of a cookbook in Spanish that will include traditional and new recipes that highlight the unique flavor of mesquite, such as tortillas, tamales, bread, cookies, waffles, ice cream, etc. For English speakers, I highly recommend the Eat Mesquite and More cookbook published by Desert Harvesters. The work of this Tucson- based non-profit has been a great inspiration for us.

To promote the edible uses of mesquite and the planting of mesquite trees in the agricultural landscape, we’ve been hosting community workshops and mesquite milling events at different locations in the region. Sharing information about the benefits of integrating mesquite into the diet and creating a local demand of the products is a critical step to achieve the widespread utilization of mesquite as a staple crop.

With the support of Via Organica, a Mexican non-profit organization that promotes regenerative organic agriculture practices, and the Organic Consumers Association in the US, we began working on the design of the first agroforestry system managed for the production of mesquite pods and their processing into flour and other value-added products. The main objective of the project is to showcase and test the agricultural potential of this high-yielding, drought tolerant perennial crop.

This pioneering project is being implemented at the Via Organica Ranch, an inspiring educational center located in the San Miguel de Allende region that hosts a wide range of educational experiences and receives visitors from around the world. The ranch is located in a subtropical, semi-arid region that receives between 480-580 mm (19-23 inches) of annual rainfall. Via Organica recently acquired the 5.5 hectares where the agroforestry system is being implemented. The land has severely degraded soils due to many years of overgrazing by cattle.

Around 650 mesquite seedlings of Prosopis laevigata were propagated on site from selected seeds that came from local wild trees that were superior in terms of annual yield, early maturation, pod sweetness, and pod size. The seedlings were grown in deep forestry tubes that promote healthy tap roots. 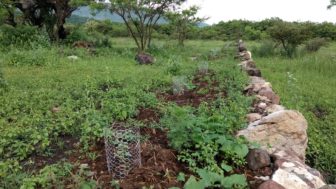 Mesquite seedlings planted along a rock terrace follosing a Keyline pattern with chiken wire to protect them from rabbits.

The layout of the agroforestry system is based on rock terraces placed 85′ apart, following a Keyline pattern that enables equidistance between rows, minimizes runoff, and distributes humidity throughout the site. The trees were planted along the rock terraces at different spacings between 4 to 6 meters (13-20′ in) order to find the most efficient spacing for the region. Inside each row, mesquite was interplanted in different combinations with other drought tolerant crops, including: maguey (Agave salmiana), nopal (Opuntia ficus-Indica), jujube (Ziziphus jujuba) and goji (Lycium chinensis). The savanna-style silvopastoral area in between rows includes wide spaced trees of sweet acacia (Acacia Farnesiana), palo dulce (Eysenhardtia polystachya), native oaks (Quercus spp.) and carob (Ceratonia siliqua).

This project is a first step in making mesquite a food crop of commercial importance at a regional level. Much work needs to be done in terms of developing improved mesquite cultivars and more efficient small-scale harvest and post-harvest processing techniques. 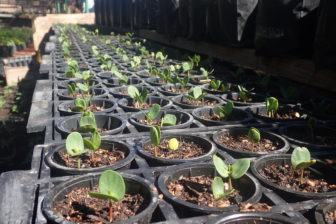 Arid and semiarid regions occupy around 60% of Mexico’s territory, this model will be a living example of how this high-yielding and reliable perennial crop can be a key component in creating agricultural systems that can regenerate degraded lands and sequester atmospheric carbon, while creating economic opportunities and feeding people in the face of climate instability and water stress.

Gerardo Ruiz Smith’s work is mostly focused on the research and propagation of drought tolerant perennial crops and design of agroforestry and silvopastoral systems that help regenerate degraded lands, restore the water balance, sequester atmospheric carbon, support the local economies, and strengthen food security for the people who live in arid and semi-arid regions of Mexico. Email gruizsmith@gmail.com.