“Regenerative Agriculture provides answers to the soil crisis, the food crisis, the health crisis, the climate crisis and the crisis of democracy.” Vandana Shiva

Thirty eight representatives from more than thirty organizations met at Dr. Shiva’s Navdanya Farm to network and explore next steps for Regeneration International, a cooperative of stake holders committed to promoting small scale organic farming as a solution to climate change. 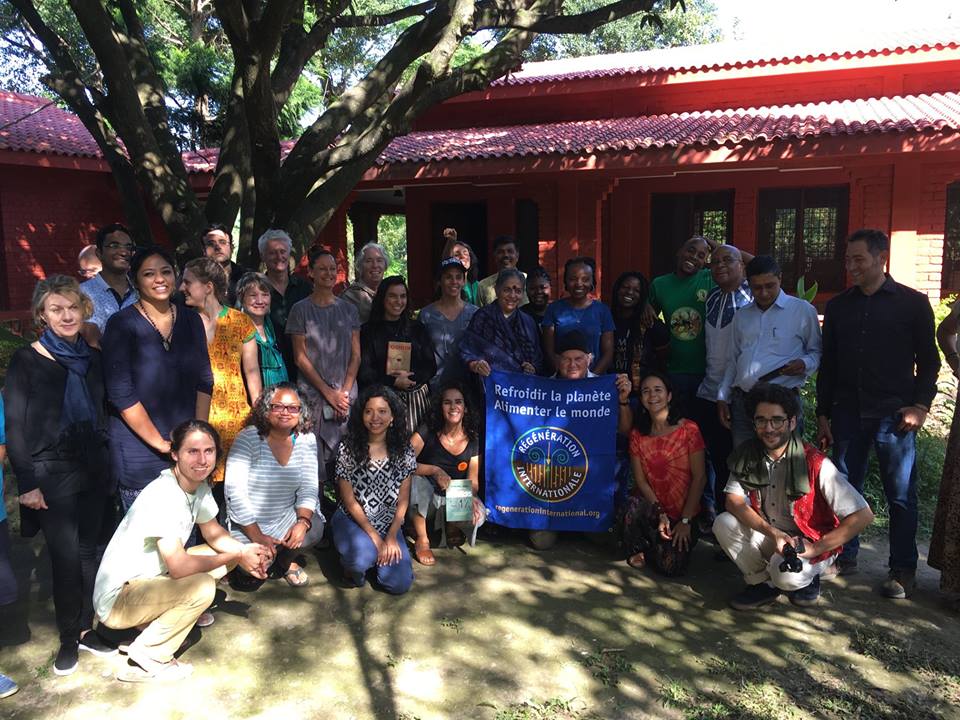 The meetings began with introductions and short presentations about each participant’s work, which ranges from soil science to filmmaking. The group represented seventeen countries from Africa, Asia and Europe, as well as North, South and Central America.

The diversity of the groups’ roots was fitting, given that many participants attended the International Biodiversity Conference that took place at the Forest Research Institute in Dehradun over three days before.

After introductions, there were more in-depth reports from Belize,

There was much interest in each region’s various strategies and challenges. One benefit of the meeting was the opportunity for the different countries to come together and share information about their work, that has a little-known but profoundly positive impact on climate change.

In the spirit of action and inspiration, Becket Films screened a soon-to-be finished cut of The Seeds of Vandana Shiva, a documentary about Dr. Shiva’s life of activism for a regenerative and peaceful world.

The next part of the meeting centered on strategies for the future and how the Regeneration International network can scale up and support the work of its members.

First there was clarification of the mission: Regeneration International exists to promote the message and practice of organic food, fiber and farming that regenerates the environment, the climate and human communities. This means that the regeneration is inclusive of partners working with nature to restore the health and biodiversity of soil, seed, water, land, food and fiber in ways that also supports the rights and welfare of small farmers, women, the indigenous, and other minorities.

There was consensus to use the film, The Seeds of Vandana Shiva as a tool for education, outreach and fundraising for our affiliate groups.

The meeting looked forward to UNFCC COP25, scheduled to take place in Brazil in November 2019 where participants decided the next international gathering of Regeneration International partners should take place. Despite the 4/1000 initiative that was signed at COP15, the issue of agriculture and food systems is still fundamentally ignored by the COP and the climate movement. For this reason it is Regeneration International’s agenda at COP25 to bring greater attention to the issue of small scale organic food and farming as a solution for climate change.

The meeting concluded with resolutions to deepen relationships, to continue to share experiences and information, to support and broadcast partners’ initiatives, and to work together on planning for COP25.