There is a long-term disaster far worse than the COVID-19 pandemic. The pandemic will end in a few years; however, the world will lose many millions more to sickness, hunger, poverty and catastrophic weather events because of the unprecedented climate emergency.

The world reached a record of 417.2 parts per million of carbon dioxide (ppm CO2)  in the atmosphere in May 2020 – the most in over 3 million years.

A study published in May 2019 shows that if we don’t succeed in radically reducing emissions, civilization could collapse by 2050. As reported by the New York Post, the authors of the report say:

“This scenario provides a glimpse into a world of ‘outright chaos’ on a path to the end of human civilization and modern society as we have known it, in which the challenges to global security are simply overwhelming and political panic becomes the norm.”

The good news is that we can turn this around by scaling up regenerative agriculture. 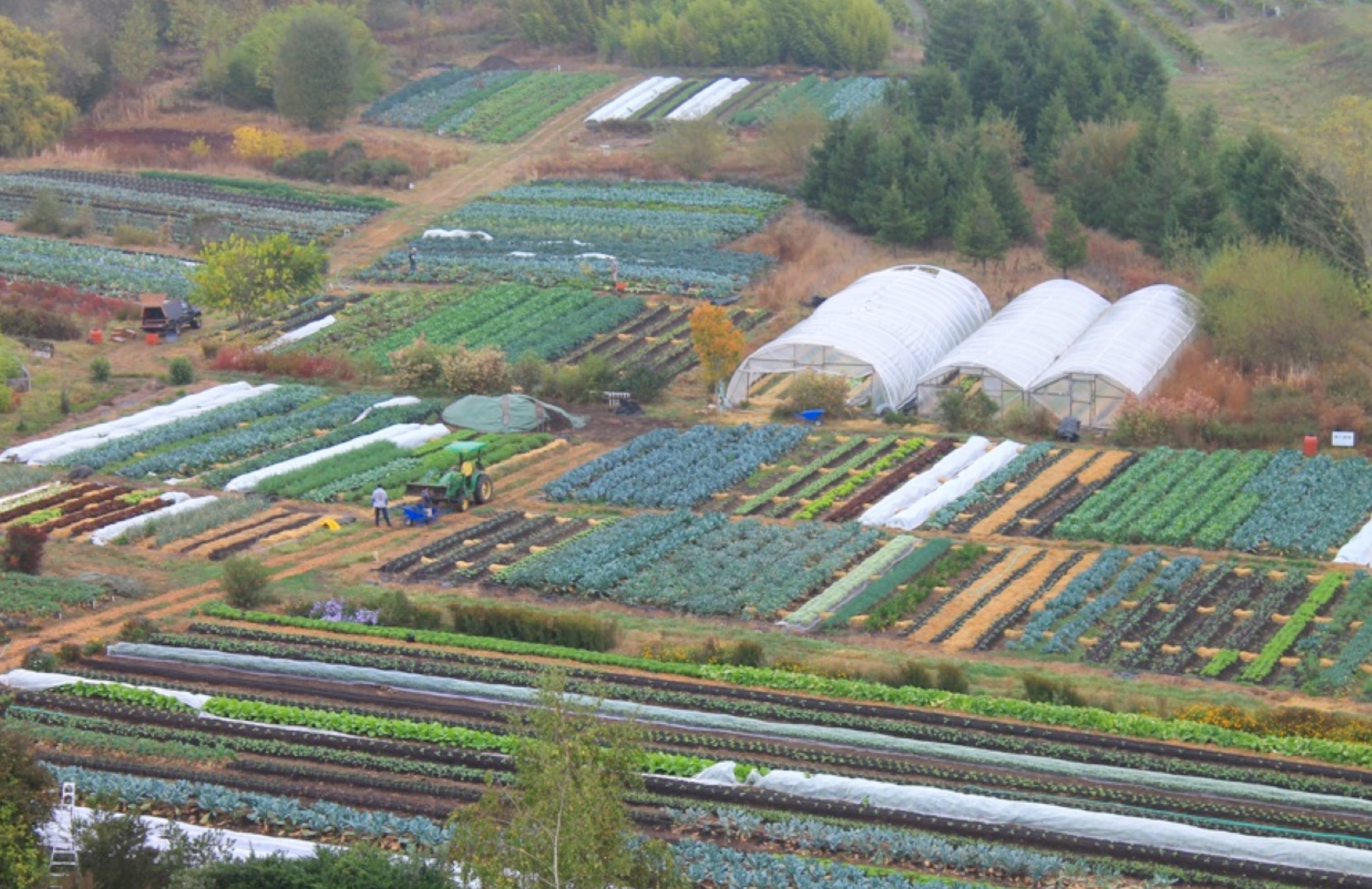 Regenerative agriculture is based on a range of food and farming systems that use the photosynthesis of plants to capture carbon dioxide and store it in the soil. The soil holds almost three times the amount of carbon than the atmosphere and biomass (forests and plants) combined.

Why is it so important to dramatically reduce the current rate of CO2 emissions?

If emissions are not reduced soon, we will be going into catastrophic climate change. This is because it will take centuries to get the heat out of our oceans. Ocean heat is a significant driver of our weather. The oceans and the atmosphere are already more than 1.8 degrees Fahrenheit (1 degree Celsius) warmer than the industrial revolution.

The energy needed to heat the atmosphere and the ocean by 1.8 degrees is equivalent to billions of atomic bombs. I am using this violent metaphor so that people can understand how much energy is being released into our atmosphere and oceans and why we will get more extreme weather events wreaking havoc on our communities and environment.

This extra energy is already violently fueling and disrupting our weather systems. It is causing weather events to be far more intense. Winter storms are becoming colder and can be pushed further south and north than normal due to this energy, bringing damaging snowstorms and intense floods.

Similarly, summer storms, especially hurricanes, tornadoes, tropical lows etc. are far more frequent and intense with deluging destructive rainfall and floods. Droughts and heat waves are more common and are resulting in more crop failures. They are also fueling damaging forest and grass fires that are burning out whole communities and changing regional ecologies due to not allowing time for recovery before the next fires.

The frequency and intensity of these types of events will only get exponentially worse when the world warms to 3.6 degrees Fahrenheit (2 degrees Celsius) which is the upper limit of the Paris climate agreement. We are on track to shoot far past this goal.

Despite the global economic shut down as a response to the COVID-19 pandemic CO2 levels still set a new record of 417.2 ppm in May 2020. This is a massive increase in emissions per year since the Paris Agreement and shows the reality is that most countries are not even close to meeting their Paris reduction commitments and many must be cheating on or ignoring their obligations.

According to peer reviewed research published by Rohling et al. in the scientific journal, Nature Geoscience, the last time the world had 380 ppm, was 3.0–3.5 Million years ago. Temperatures were between 5 to 16 C warmer (9 – 28.8 F) and sea levels were 20 to 30 meters higher (65 to 100 ft) There was a mass extinction event around that period.

Even if the world transitioned to 100 percent renewable energy tomorrow, this will not stop the temperature and sea level rises. The world will continue to heat up because it will take more than 100 years for the CO2 levels to drop naturally.

The world cannot cope with a few million refugees from Africa, Central America and the Middle East. How do we cope with hundreds of millions of climate change refugees? There will be widespread conflict over food, water and land.

The United Nations Paris Agreement proposes net CO2 neutrality by 2050. The evidence shows this will be too late to stop the enormous damage of catastrophic climate change. At the current rate of emissions there would be close to 500 ppm of CO2 in the atmosphere.

The fact is we are in a serious climate emergency now. We must speed up the transition to renewable energy, stop the clearing of all forests and we have to make a great effort to drawdown CO2  in the atmosphere to the pre industrial level of 280 ppm.

Four hundred and seventeen ppm is way past the Paris objective of limiting the temperature increase to 3.6 degrees Fahrenheit (2 degrees Celsius).

In order to stabilize atmospheric CO2 levels, regenerative agricultural systems would have to draw down the current emissions of 3.3 ppm of CO2 per year. Using the accepted formula that 1 ppm CO2 = 7.76 Gt CO2 means that 25.61 gigatons (Gt) of CO2 per year needs to be drawn down from the atmosphere. We have to draw down more than this to reduce the levels of CO2 in order to regenerate our climate and prevent a catastrophic climate emergency.

There are numerous regenerative farming systems that can sequester CO2  from the atmosphere through photosynthesis, and turn it into soil organic matter through the actions of the roots and soil biology or the soil microbiome.

We don’t have time to waste on farming systems that only sequester small amounts of CO2. We need to concentrate on scaling up systems that can achieve high levels of sequestration. The simple back of the envelope calculations used for the three examples below are a good exercise to show the considerable potential of these best-practice regenerative systems to reverse the climate emergency.

These results are currently being replicated in other trials.

These figures mean that BEAM can sequester 37,700 kilos of CO2 per hectare per year which is approximately 37,000 pounds of CO2 per acre.

BEAM can be used in all soil-based food production systems including annual crops, permanent crops and grazing systems, including arid and semi arid regions. If BEAM was extrapolated globally across agricultural lands it would sequester 185 Gt of CO2 per year. 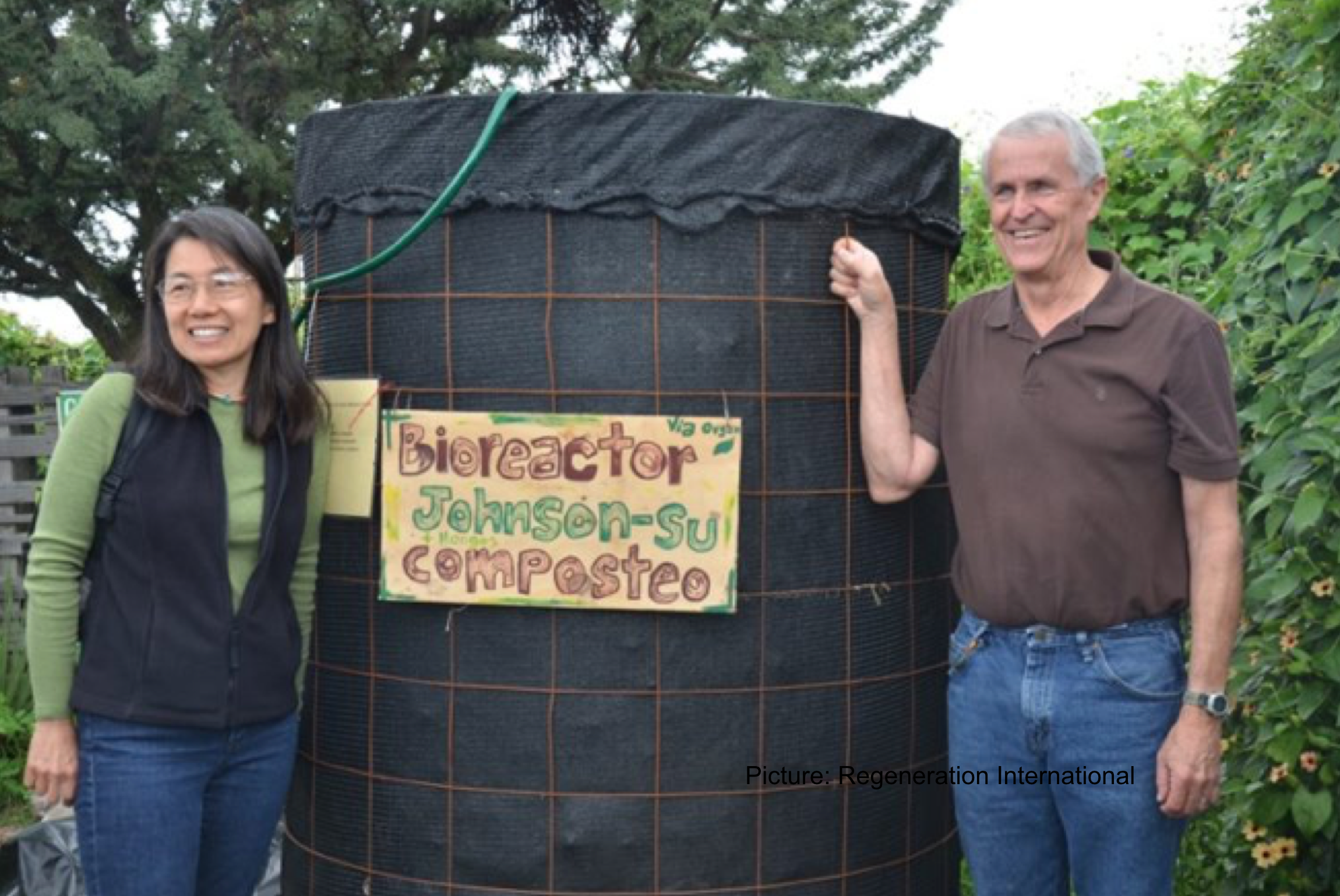 Potential of “No Kill No Till”

Singing Frogs Farm is a highly productive “No Kill No Till” richly biodiverse organic, agro-ecological horticulture farm on three acres. The key to their no-till system is to cover the planting beds with mulch and compost instead of plowing them or using herbicides, and planting directly into the compost, along with a high biodiversity of cash and cover crops that are continuously rotated to break weed, disease and pest cycles.

According to Chico State University, they have increased the soil organic matter (SOM) levels by 400 percent in six years. The Kaisers have increased their SOM from 2.4 percent to an optimal 7-8 percent with an average increase of about 3/4 of a percentage point per year. This farming system is applicable to more than 80 percent of farmers around the world as the majority of farmers have less than two hectares or five acres.

If the Singing Frog farm was extrapolated globally across arable and permanent crop lands it would sequester 179 Gt of CO2 per year.

The potential of regenerative grazing

The Savory Institute and many others have been scaling up holistic managed grazing systems on every arable continent. There is now a considerable body of published science and evidence based practices showing these systems regenerate degraded lands, improve productivity, water holding capacity and soil carbon levels.

Around 68 percent of the world’s agricultural lands are used for grazing. The published evidence shows that correctly managed pastures can build up soil carbon faster than many other agricultural systems and this is stored deeper in the soil.

“In a region of extensive soil degradation in the southeastern United States, we evaluated soil C accumulation for 3 years across a 7-year chronosequence of three farms converted to management-intensive grazing. Here we show that these farms accumulated C at 8.0 Mg ha−1 yr−1, increasing cation exchange and water holding capacity by 95% and 34%, respectively.”

That means they have sequestered 29,360 kilos of CO2 per hectare per year. This is approximately 29,000 pounds of CO2  per acre. If these regenerative grazing practices were implemented on the world’s grazing lands they would sequester 98.6 Gt of CO2 per year. 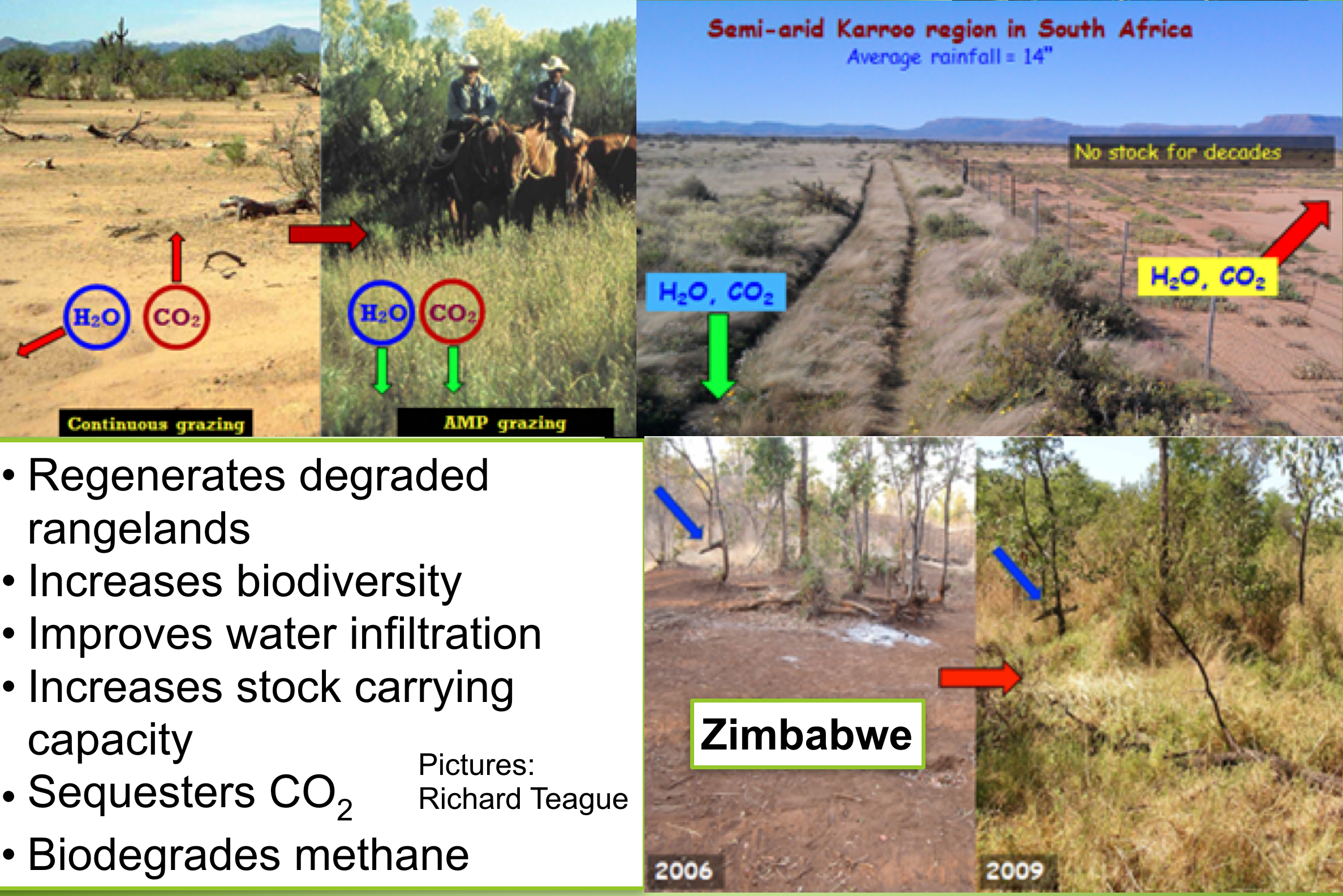 Transitioning a small proportion of global agricultural production to these evidence based, best-practice, regenerative systems will sequester enough CO2 to reverse climate change and restore the global climate.

Ten percent of agricultural lands under BEAM could sequester 18.5 Gt of CO2 per year.

Ten percent of smallholder farms across arable and permanent crop lands using Singing Frog Farm’s “No Kill No Till” systems could sequester 18 Gt of CO2 per year.

And a further 10 percent of grasslands under regenerative grazing could sequester 10 Gt of CO2 per year.

This would result in 46.5 Gt of CO2 per year being sequestered into the soil which is more than the amount of sequestration needed to draw down the 25.61 Gt of CO2 that is currently being emitted.

These back-of-the-envelope calculations are designed to show the considerable potential of scaling up proven high-performing regenerative systems. The examples are “shovel ready” solutions, as they are based on existing practices.

There is no need to invest in expensive, potentially dangerous and unproven technologies such as carbon capture and storage or geo-engineering.

We are in a climate emergency and we need every tool in the toolbox to fix this problem. We don’t have the luxury of wasting precious time on intellectual arguments about whether this is possible or to convince skeptics and land managers unwilling to change.

It is time to get on with drawing down the excess CO2 by scaling up existing regenerative agriculture practices. This is very doable and achievable. It would require minimal financial costs to fund existing institutions, training organizations and relevant NGOs to run courses and workshops.

Most importantly, this needs to be scaled up through proven farmer-to-farmer training systems. The evidence shows that these types of peer-to-peer systems are the most effective way to increase adoption of best practices.

We owe this to future generations and to all the rich biodiversity on our precious living planet.

If BEAM was extrapolated globally across agricultural lands it would sequester 185 Gt of CO2/yr.

The Kaisers have managed to increase their soil organic matter from 2.4% to an optimal 7-8% in just six years, an average increase of about 3/4 of a percentage point per year (Elizabeth Kaiser Pers. Com. 2018 and Chico State University https://www.csuchico.edu/regenerativeagriculture/demos/singing-frogs.shtml)

If these regenerative grazing practices were implemented on the world’s grazing lands they would sequester 98.6 Gt CO2/yr.