SHARM AL-SHEIKH – COP27 ends with an agreement for a “Loss and Damage” fund without any implementation plans or consensus to reduce greenhouse gas emissions. In other words, this means very little progress for solid recommendations for climate action and achieving net-zero emissions urged by the UNFCCC to avoid the catastrophic tipping points of a +1.5C warmer planet.

Sponsored by companies such as Coke, with a presidency held by a military government that severely represses its citizens (in a holiday resort far away from the realities of the Egyptian people) we were never going to expect much from the outcome of COP27 to shift the international community away from its business-as-usual pattern. 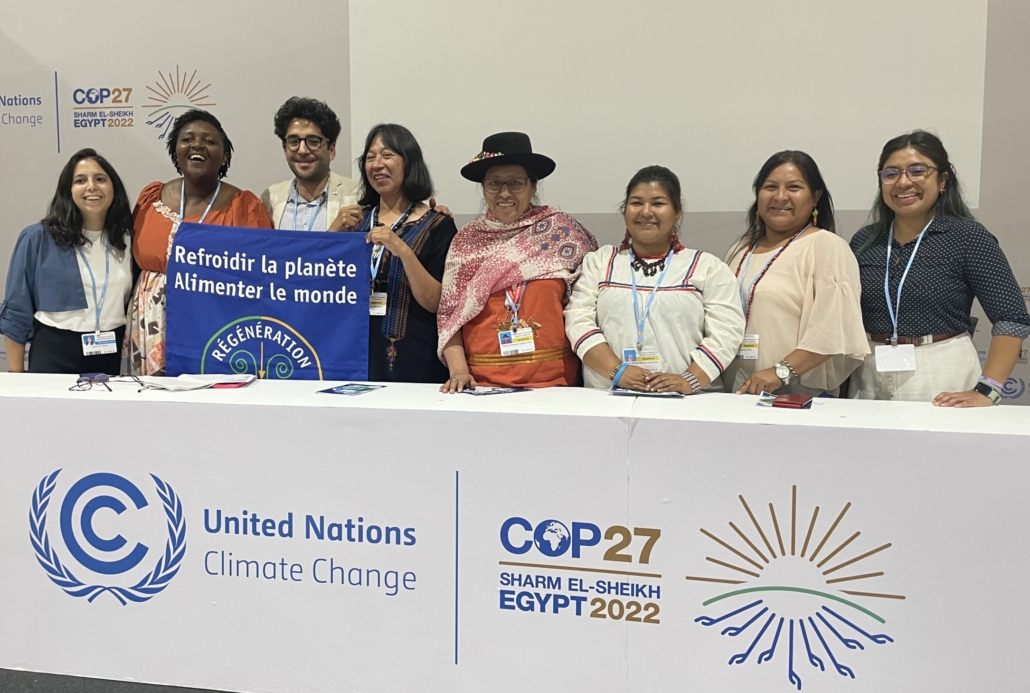 However there were some good works made by many.

Despite these circumstances, Regeneration International sent a small and dedicated delegation to COP27, where it joined forces with friends and partners such as AFSA, IPES-Food, IFOAM Organics International, SEKEM, ONAMIAP and the “4 per 1000” Initiative to advocate evidence and concrete examples of how agroecology, regenerative agriculture and indigenous agrobiodiversity (preserving traditional seeds) can reverse global warming and nourish communities. The management of soils, their organic matter, and their capacity to build back ecological stability, including sequestering carbon, must be in every negotiation and commitment since it is the hope we have for a livable planet.

Our team also had the chance to interview some light bearing figures in our movement; you can watch them by clicking on the links below.

RI’s Africa Coordinator Precious Phiri and Bridget Mugambe of AFSA (Alliance of Food Sovereignty in Africa) and gain insight into Africa’s most prominent civil society and their actions to regenerate the climate emergency through agroecology.

Watch our interview with Kayaa Christine Nakimwero, a member of Parliament in Uganda who is campaigning for seed sovereignty to ensure climate resiliency and food security in Africa.

RI was also an official partner of the Future Economy Forum organized by SEKEM. Together with many other partners and friends, we formed the regenerative movement’s most significant gathering since RI’s congregation in 2015 at COP21 in Paris. A series of dialogues and events offered a space for the regeneration movement to merge our strengths, strategies, and ideas and move forward together for regenerative agriculture and ecosystem restoration.

For the first time in COP history, Agriculture and food systems were highlighted as a top priority. With the UNFCCC’s Koronivia Joint Work on Agriculture implementing plans for climate action through agriculture and the COP hosting more than 200 side events on food and agriculture, the momentum for food and farming is there to stay. Yet, much of the COP misused the term regenerative, and very few side events promoted anything but regenerative and agroecological practices. GMOs, lab meat, and no-till glyphosate-drenched practices were on the menu of most side events, with the Food Systems Pavilion opening with pro-GMO/industry rhetoric from various members of AGRA and other green revolution advocates.

RI participated in several side events, including the “4 per 1000” High-Level Segment promoting tangible and shovel-ready regenerative practices such as holistic planned grazing and regenerative agroforestry via our Billion Agave Project. Our presence was all the most important and has allowed us to unite with our partners in preparation for COP28 to aggregate the true policymakers, scientists, advocates, and practitioners of change to form an ironclad alliance with our partners. 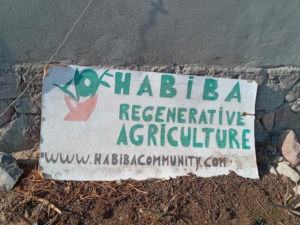 Being in South Sinai, our COP delegation took the opportunity to visit the Habiba Community, located only a few hour’s drive from the COP negotiations. Deeply integrated into the Bedouin cultural landscape, this organic farm is empowering women and training hundreds of small hold farmers across 75 farms to adapt and mitigate climate change using regenerative practices.

Despite the many circus like confusion that went together with hosting a COP in a place for the World’s rich, we are glad we were there, together with our allies. There is still a lot of ground to be covered, we need more and more civil society representatives in the negotiation rooms. We need to get in touch with country-based negotiators so that we can also influence the outcomes of these negotiations. As earlier stated, we look forward to the next COP, this time with much bigger numbers from our movement. It is needed.