The human brain is 95 percent water. Water makes up more than two-thirds of human body weight. Seventy-one percent of Earth’s surface is covered with water. Yet only 2.5 percent of Earth’s water is freshwater, of which only a small proportion is actually available to meet the needs of humans and animals. (Some of it is locked up in glaciers and ice, for example).

Water is life. We are at its mercy, vulnerable to its scarcity.

If you believe the headlines, we’re running out of water: “New NASA Data Show How the World Is Running out of Water,” Washington Post, 2016; “Water Crisis in Brazil: Why the Largest City in the Americas Is Drying out,” Humanosphere, 2015;  “Brazil’s Olympics Water Crisis Is a Constant Reality for Locals,” The Weekly Magazine, 2016; “Indian Water Crisis Shuts Down Multiple Power Plants,” POWER Magazine, 2016; “Hurricane Drought Hits a New Record,” Scientific American, 2016.

But how can that be? When the amount of water on the planet today is the same as it’s always been?

Regeneration International, a project of the Organic Consumers Association,  talked to Vermont-based journalist Judith D. Schwartz about her new book, “Water in Plain Sight: Hope for a Thirsty World,” which introduces unlikely, revolutionary and simple solutions to inspire a re-framing of the way we think about, and are challenged, by water.

“All of the news that we hear about water these days seems to be bad news,” said Schwartz said. “We hear about droughts and wildfires (caused by parched landscapes), and depleted groundwater resources. The sense we get from what we hear is that this is all inevitable.”

But water scarcity and crisis aren’t inevitable, according to Schwartz.

“What I’d like to bring to the conversation is that this isn’t a case of bad environmental karma, brought on by we’ve been doing to the planet. This is the result of distorted water cycles. And once we understand that, there is much that we can do to restore the water cycle, not only on a very small local basis but also on large landscapes. Most of it does turn on the extent to which we are able to mimic natural processes.”

In her book, Schwartz provides examples of how people are already managing water by mimicking nature. For example, a couple harvests dew in the Texas desert to meet their needs, and those of their many guests. Farmers in rural Zimbabwe and Mexico are greening desertified land through Holistic Planned Grazing, an approach to livestock management that mimics natural systems. Their efforts have successfully restored the water cycle and local biodiversity, and allowed rural villagers to get off international food aid.

Another approach to managing water, one that has been gaining international traction since the COP21 Paris Climate Summit, involves revitalizing soils. One-third of our excess atmospheric CO2 can be attributed to huge losses of carbon in the soil, primarily due to destructive agriculture and land use practices such as deforestation, soil-tillage and leaving soil bare.

By disrupting the carbon cycle, we’ve also disrupted the water cycle, according to Schwartz. This is because carbon is essential to keeping water in the ground.

The failure to retain water has, in turn, altered climate dynamics. According to Australian soil microbiologist Walter Jehne, more than 90 percent of our climate is driven by hydrological processes. History is littered with cautionary tales of communities and even civilizations—the Mayans, Pacific Islanders, peoples of the Fertile Crescent—who depleted their soil or chopped down forests, only to suffer from floods and drought. The moral of the story: Carbon-rich soil and the plants it sustains help manage the water cycle, and the water cycle drives weather and climate.

Can we actually avert both a climate crisis and a water crisis by, at least in part, paying more attention to how we manage water?

Yes, says Schwartz. Farmers worldwide are choosing to work with the carbon cycle. If regenerative agriculture and land-use practices are adopted by farmers worldwide, we’ll eventually restore carbon to the soil, and also restore the Earth’s natural water cycles. Even better, in the process, we’ll provide abundant and nutritious food, and increase biodiversity on the land, and in our diets.

“Every 1-percent increase in soil carbon represents an additional 20,000 gallons per acre that the land can hold,” says Schwartz. That’s the size of a 28’ above ground swimming pool—and that’s a lot of water.

“If we planted trees at a sufficiently large scale it would improve climate. Even planting on a local scale can improve groundwater recharge,” ecologist Douglas Sheil says in “Water in Plain Sight.” Why not focus on growing carbon in the soil and re-vegetating our landscapes?

RI asked Schwartz what is stopping us from scaling solutions like this on a global level. “What stops us is imagination,” Schwartz said. “It’s because most of us, in particular people who make decisions, and the policymakers, are disconnected from the natural processes that govern the flow of water.”

So, what can each of us do? Beyond shifting our attention to what’s possible and appreciating how lush our landscapes can be, Schwartz says, “a very important thing is what food you buy, what clothing you buy and learning more about the practices that are generating the food and fiber that we use in our lives.”

Water in Plain Sight is a reminder that “every acre of land on the planet offers a choice, toward enhancement and health and complexity, or toward degradation. Like animals managed well, we can act upon the land in a positive way.”

Why is water vapor the most significant greenhouse gas? Why is the Syrian migration crisis a result of mismanagement of the land? Watch the video interview to learn more. 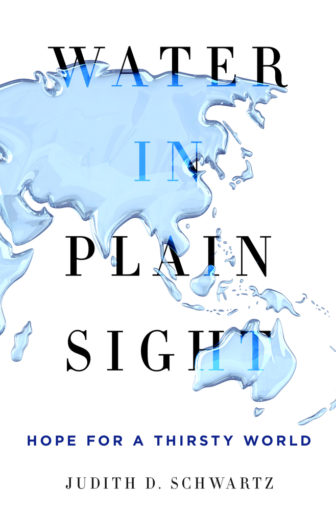 Buy “Water in Plain Sight: Hope for a Thirsty World.”