Day and night will soon align, marking the start of spring. But the timing of nature’s calendar is starting to fall out of sync.

In a study published in Nature Climate Change, a team of researchers from the University of South Florida in Tampa found that animal species are shifting the timing of their seasonal activities, also known as phenology, at different rates in response to changing seasonal temperatures and precipitation patterns.

“As species’ lifecycles grow out of alignment, it can affect the functioning of ecosystems with potential impacts on human food supplies and diseases,” said lead author Jeremy Cohen, PhD, postdoctoral researcher at the University of South Florida Department of Integrative Biology. “We rely on honeybees to pollinate seasonal crops and migratory birds to return in the spring to eat insects that are crop pests and vectors of human diseases. If the timing of these and other seasonal events are off, ecosystems can malfunction with potentially adverse effects on humans.”

Agroforestry could play an important role in mitigating climate change because it sequesters more atmospheric carbon in plant parts and soil than conventional farming, according to Penn State researchers.

An agricultural system that combines trees with crops and livestock on the same plot of land, agroforestry is especially popular in developing countries because it allows small shareholder farmers — who have little land available to them — to maximize their resources. They can plant vegetable and grain crops around trees that produce fruit, nuts and wood for cooking fires, and the trees provide shade for animals that provide milk and meat.

The transition from agriculture to agroforestry significantly increased soil organic carbon an average of 34 percent, according to Michael Jacobson, professor of forest resources, whose research group in the College of Agricultural Studies conducted the study. The conversion from pasture/grassland to agroforestry produced soil organic carbon increases of about 10 percent, on average.

“We showed that agroforestry systems play an effective role in global carbon sequestration, involved in carbon capture and the long-term storage of atmospheric carbon dioxide,” he said. “The process is critical to mitigating or deferring global warming.”

However, carbon was not stored equally in different soil levels, noted lead researcher Andrea De Stefano, a graduate student at Penn State when the study was done, now at Louisiana State University. He pointed out that the study, which was published in December in Agroforestry Systems, provides an empirical foundation to support expanding agroforestry systems as a strategy to reduce atmospheric carbon dioxide concentration and mitigate climate change.

“The conversion from forest to agroforestry led to losses in soil organic carbon stocks in the top layers, while no significant differences were detected when deeper layers were included,” De Stefano said.

For years, grasslands across the country have been plowed up to make way for the production of commodity crops, such as wheat, alfalfa, corn, and soybeans. The loss of grasslands is devastating for local ecosystems, and also has long-term, negative effects for ranchers, the hunting industry, and for communities that depend on them for flood prevention and water filtration.

The highest conversion rate over the last year was found in northern Texas, which is in the southernmost portion of the Great Plains. Grassland conversion rates were also high in parts of North Dakota, Montana, Minnesota, and Kansas.

Major innovations in the evolution of vegetation such as the Devonian origin of forests created new weathering regimes and soils (Alfisols, Histosols) that increased carbon consumption and sequestration and ushered in the Permian-Carboniferous Ice Age. Similarly, global expansion of grasslands and their newly evolved, carbon-rich soils (Mollisols) over the past 40 million years may have induced global cooling and ushered in Pleistocene glaciation. Grassland evolution has been considered a consequence of mountain uplift and tectonic reorganization of ocean currents, but it can also be viewed as a biological force for global change through coevolution of grasses and grazers. Organisms in such coevolutionary trajectories adapt to each other rather than to their environment, and so can be forces for global change. Some past farming practices have aided greenhouse gas release. However, modern grassland agroecosystems are a potential carbon sink already under intensive human management, and carbon farming techniques may be useful in curbing anthropogenic global warming.

The bacteria in and on our bodies have been shown to be vital for human health, influencing nutrition, obesity and protection from diseases.

But science has only recently delved into the importance of the microbiome of plants. Since plants can’t move, they are especially reliant on partnerships with microbes to help them get nutrients.

Now, University of Washington plant microbiologist Sharon Doty, along with her team of undergraduate and graduate students and staff, has demonstrated that poplar trees growing in rocky, inhospitable terrain harbor bacteria within them that could provide valuable nutrients to help the plant grow. Their findings, which could have implications for agriculture crop and bioenergy crop productivity, were published May 19 in the journal PLOS ONE.

The researchers found that microbial communities are highly diverse, varying dramatically even in cuttings next to each other.

“This variability made it especially difficult to quantify the activity, but is the key to the biology since it is probably only specific groupings of microorganisms that are working together to provide this nutrient to the host,” said Doty, a professor in the UW School of Environmental and Forest Sciences.

Nitrogen fixation is a natural process that is essential to sustain all forms of life. In naturally occurring low-nutrient environments such as rocky, barren terrain, plants associate with nitrogen-fixing bacteria to acquire this essential nutrient.

It’s well documented that nitrogen fixation happens in bacteria-rich nodules on the roots of legumes such as soybeans, clovers, alfalfa and lupines. Bacteria help the roots fix atmospheric nitrogen gas into a form which can be used by the plant.

In early September 1995, after spending 15 years working as an international news television producer and cameraman, John D. Liu embarked on a life-changing assignment that ultimately prompted this section (Figure 4.8.1). Liu was part of a documentary crew flying in a small Soviet-era copy of a Fokker Friendship aircraft (dubbed the “Friendshipsky”), which landed at a small, dusty airport in Yanan in Shaanxi Province, on China’s Loess Plateau (see Box 4.8.1).

The Loess Plateau has proven to be an excellent place to pursue a type of ecological forensics to witness and understand how human actions over time can destroy natural ecological function. The restoration process of the plateau is providing a living laboratory in which the potential of returning ecological function to long degraded landscapes can be studied. Essentially, what has been witnessed and docu- mented on the Loess Plateau is that it is possible to rehabilitate large-scale damaged ecosystems. This realization has potentially enormous implications for human civilization. Witnessing firsthand many geopolitical events as a journalist, including the rise of China from poverty and isolation throughout the 1980s, the Tiananmen tragedy in 1989, the collapse of the Soviet Union, global terrorism, and much more, provided John D. Liu with references to compare to the restoration of the Loess Plateau. He quickly came to realize that, in terms of significance for a sustainable future for humanity, understanding what occurred on the Loess Plateau would be critical.

Yanan is perhaps most famous as the mountainous hideout where Mao Zedong led the Chinese communist Red Army to escape annihilation by the Nationalists (this retreat is often referred to as the “Long March”). The typical dwellings in Yanan at the time were man-made cave dwellings dug so deeply into the soil that they were almost invisible, which made Yanan a particularly good place for a revolutionary to disappear. By 1995, the Chinese communist revolution had moved on and China’s socialist market economy was flourishing on the eastern coast and making waves worldwide. But Yanan remained virtually untouched by the agricultural changes, the industrial growth, and the increasing international influence that much of China was experiencing. Yet in this backwater, a new revolution was brewing.

The purpose of the assignment was a World Bank baseline study for an ambitious development project called the Loess Plateau Watershed Rehabilitation Project (see Box 4.8.2). The scene (as depicted in Figure 4.8.2) was of a completely barren landscape.

There is a growing realization worldwide that biodiversity is fundamental to agricultural production and food security, as well as a valuable ingredient of environmental conservation. Yet predominant patterns of agricultural growth have eroded biodiversity in, for example, plant genetic resources, livestock, insects and soil organisms. This erosion has caused economic loss, jeopardizing productivity and food security, and leading to broader social costs. Equally alarming is the loss of biodiversity in “natural” habitats from the expansion of agricultural production to frontier areas. The conflicts between agriculture and biodiversity are by no means inevitable. With sustainable farming practices and changes in agricultural policies and institutions, they can be overcome. 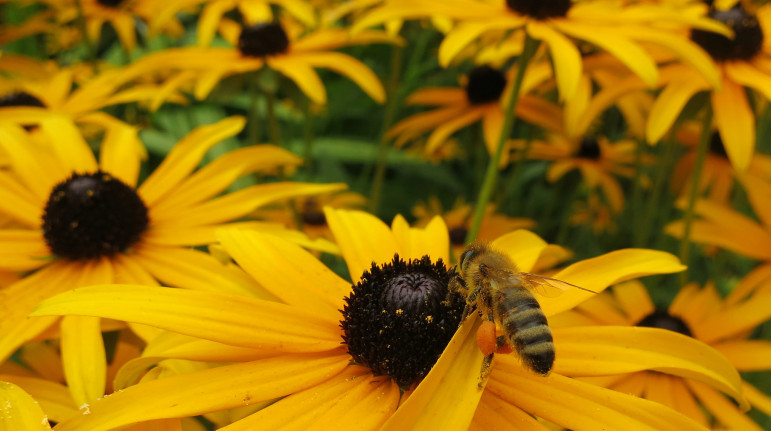 Historical evidence and current observation show that biodiversity maintenance must be integrated with agricultural practices—a strategy that can have multiple ecological and socio-economic benefits, particularly to ensure food security. Practices that conserve, sustainably use and enhance biodiversity are necessary at all levels in farming systems, and are of critical importance for food production, livelihood security, health and the maintenance of ecosystems. This article summarizes the main conflicts and complementarities between biodiversity and agriculture, discusses the ecosystem services provided by agricultural biodiversity, and highlights principles, policies and practices that enhance diversity in agroecosystems.

For decades now mankind has been at the fore in creating a vicious cycle with critical environmental consequences as a result. By degrading the atmosphere with greenhouse gas emissions, land degradation has risen. This in turn is worsening the degradation of the atmosphere. Atmospheric greenhouse gas concentrations have been increasing for some two centuries, mostly a result of human activities, spearheaded primarily by the rapid rise of industrialization. The degradation of land, however, through unviable agricultural practices also has resulted in emissions of greenhouse gases. As governments, NGOs and corporations around the globe set limits on the amount of carbon dioxide emitted by automobiles, factories and power plants into the atmosphere, a way to “recycle” CO2 into the ground, carbon sequestration, has received less attention and international support. Little recognized is the fact that the world’s soils hold more organic carbon than that held by the atmosphere as CO2 and vegetation combined (see Fig. 1). Carbon sequestration is the process by which CO2 sinks (both natural and artificial) remove carbon dioxide from the atmosphere, primarily as plant organic matter in soils. Soil carbon sequestration is an important and immediate sink for removing atmospheric carbon dioxide and mitigating global warming and climate change. Organically managed soils can convert carbon dioxide from a greenhouse gas into a food-producing asset. Combined with sequestration in non-agricultural soil, the potential for land to hold carbon and act as a sink for greenhouse gases is unparalleled. This should help put a new value on land, the value of its capability to sequester and to literally “breathe in” the excess blanket of CO2 and help cool the planet. And when mixed with water and sun, CO2 enriches the soil, giving life to trees and vegetation, which then can generate more carbon sinks.