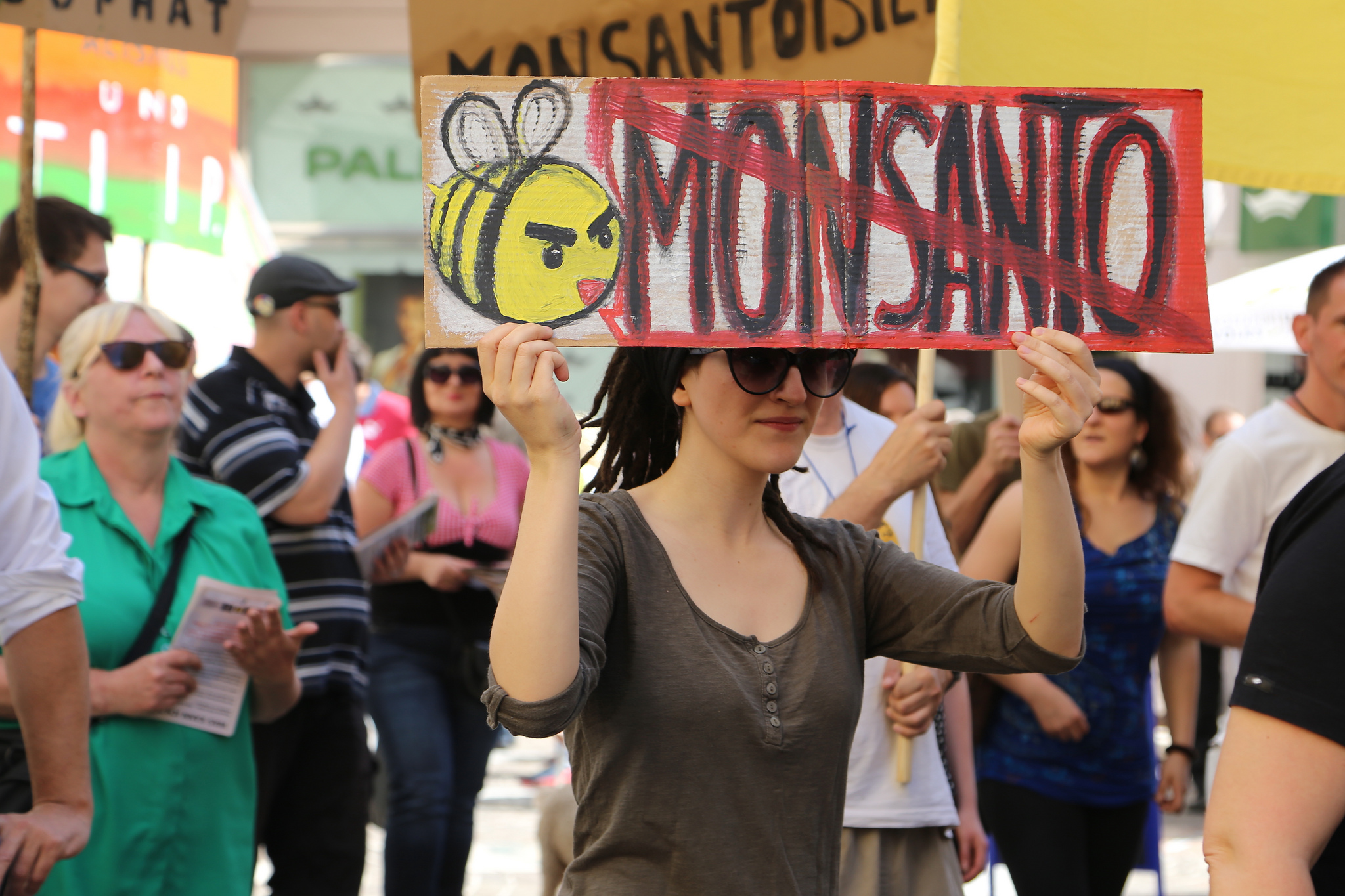 FOR IMMEDIATE RELEASE December 3, 2015 CONTACT: US: Organic Consumers Association/Regeneration International: Katherine Paul, 207-653-3090, katherine@organicconsumers.org (US); Via Organica/Regeneration International: Ercilia Sahores, ercilia@viaorganica.org; Stichting Monsanto Tribunal: Arnaud Apoteker, arnaudapoteker@yahoo.fr, +33 (0)6 07 57 31 60 (France) Global Food, Farming and Environmental Justice Groups to Put Monsanto on Trial for Crimes Against Human Health and the Environment in the International People’s Court in The Hague  Organic Consumers Association, IFOAM, Navdanya, Regeneration International and others form Monsanto Tribunal Foundation in advance of World Food Day 2016 PARIS – The Organic Consumers Association (OCA), IFOAM International Organics, Navdanya, Regeneration International (RI), and Millions Against Monsanto, joined by dozens of global food, farming and environmental justice groups announced today that they will put Monsanto MON (NYSE), a US-based transnational corporation, on trial for crimes against nature and humanity, and ecocide, in The Hague, Netherlands, next year on World Food Day, October 16, 2016. The announcement was made at a press conference held in conjunction with the COP21 United Nations Conference on Climate Change, November 30 – December 11, in Paris. Speaking at the press conference, Ronnie Cummins, international director of the OCA (US) and Via Organica (Mexico), and member of the RI Steering Committee, said: “The time is long overdue for a global citizens’ tribunal to put Monsanto on trial for crimes against humanity and the environment. We are in Paris this month to address the most serious threat that humans have ever faced in our 100-200,000 year evolution—global warming and climate disruption. Why is there so much carbon dioxide, methane and nitrous oxide in the atmosphere and not enough carbon organic matter in the soil? Corporate agribusiness, industrial forestry, the garbage and sewage industry and agricultural biotechnology have literally killed the climate-stabilizing, carbon-sink capacity of the Earth’s living soil.” Vandana Shiva, physicist, author, activist and founder of Navdanya, and member of the RI Steering Committee said: “Monsanto has pushed GMOs in order to collect royalties from poor farmers, trapping them in unpayable debt, and pushing them to suicide. Monsanto promotes an agro-industrial model that contributes at least 50 percent of global anthropogenic greenhouse gas emissions. Monsanto is also largely responsible for the depletion of soil and water resources, species extinction and declining biodiversity, and the displacement of millions of small farmers worldwide.” Andre Leu, president of IFOAM and a member of the RI Steering Committee, said: “Monsanto is able to ignore the human and environmental damage caused by its products, and maintain its devastating activities through a strategy of systemic concealment: by lobbying regulatory agencies and governments, by resorting to lying and corruption, by financing fraudulent scientific studies, by pressuring independent scientists, and by manipulating the press and media. Monsanto’s history reads like a text-book case of impunity, benefiting transnational corporations and their executives, whose activities contribute to climate and biosphere crises and threaten the safety of the planet.” Marie-Monique Robin, journalist and author of the best-selling documentary (and book by the same name), “The World According Monsanto,” said: “This International Citizens’ Tribunal is necessary because the defense of the safety of the planet and the conditions of life on Earth is everyone’s concern. Only through a collective resurgence of all living forces will we stop the engine of destruction. That’s why today I am calling on all citizens of the world to participate in this exemplary tribunal.” Also speaking at the conference were Valerie Cabanes, lawyer and spokesperson for End Ecocide on Earth; Hans Rudolf Herren, president and CEO of the Millennium Institute, president and founder of Biovision, and member of the RI Steering Committee; Arnaud Apoteker, creator of the anti-GMO campaign in France, which became one of the priority campaigns of Greenpeace France, and author of “Fish in Our Strawberries: Our Manipulated Food;” and Olivier De Schutter, co-chair of the International Panel of Experts on Sustainable Food Systems (IPESFood) and former UN Special Rapporteur on the Right to Food. Since the beginning of the twentieth century, Monsanto has developed a steady stream of highly toxic products which have permanently damaged the environment and caused illness or death for thousands of people. These products include:

Relying on the “Guiding Principles on Business and Human Rights” adopted by the UN in 2011, an international court of lawyers and judges will assess the potential criminal liability of Monsanto for damages inflicted on human health and the environment. The court will also rely on the Rome Statute that created the International Criminal Court in The Hague in 2002, and it will consider whether to reform international criminal law to include crimes against the environment, or ecocide, as a prosecutable criminal offense. The International Criminal Court, established in 2002 in The Hague, has determined that prosecuting ecocide as a criminal offense is the only way to guarantee the rights of humans to a healthy environment and the right of nature to be protected. Full list of founding organizations (so far) here. https://regenerationinternational.org/monsanto-tribunal-supporting-organizations/ Full list of Monsanto Tribunal Foundation organizing members here. https://regenerationinternational.org/members-of-the-organizing-committee/ More information will be available at https://www.monsanto-tribunal.org/, after 2:30 p.m. EU time on December 3, 2015. The Organic Consumers Association (OCA) https://www.organicconsumers.org/ is an online and grassroots non-profit 501(c)(3) public interest organization campaigning for health, justice, and sustainability. The Organic Consumers Fund is a 501(c)4 allied organization of the Organic Consumers Association, focused on grassroots lobbying and legislative action. Regeneration International is a 501(c)(3) nonprofit dedicated to building a global network of farmers, scientists, businesses, activists, educators, journalists, governments and consumers who will promote and put into practice regenerative agriculture and land-use practices that: provide abundant, nutritious food; revive local economies; rebuild soil fertility and biodiversity; and restore climate stability by returning carbon to the soil, through the natural process of photosynthesis.