The west is still in the thick of wildfire season and 2016 is already one to leave Smoky the Bear in tears. California is seeing a 20 percent uptick in fires compared to 2015—itself a rough fire year—while a fast-moving blaze has virtually destroyed the California town of Lower Lake. A story in today’s Washington Post grimly begins: “California is burning.”

While fire is always part of nature, many attribute its increased frequency and intensity to climate change. Certainly, that makes sense: longer stretches of warm weather and earlier snowmelt create a fire-friendly scenario. But what does this connection do for us, beyond providing another reason to rue the continued assaults on our climate? For the terms “climate change” and “global warming” elide the dynamics that create the constellation of factors that, collectively, we call climate. However, by zeroing in on the ecology of fire-prone regions, we can find ways to minimize the risk and severity of the fires that threaten homes and wilderness areas—not to mention the lives of firefighters.

For example, since arid conditions beckon fire, we can ask how healthy environments maintain moisture. Plentiful rain is one obvious answer, but equally important is what happens to rain once it falls. Enter “green water”, or water held in soils. We generally think of freshwater in terms of lakes and rivers, but two-thirds of rainfall becomes green water. When rain falls on living soil that’s rich in organic matter, it stays in the system and sustains plant and microbial life. Rain that falls on soil depleted by tillage or chemicals streams away, as does all the rainwater that strikes concrete or asphalt. Dry, degraded soil (read: dirt) doesn’t absorb water, thirsty though it may be. For every one percent increase in soil organic matter, soil stores 20,000 gallons of water per acre.

Historically, our western landscapes were kept hydrated in part by beavers. According to Brock Dolman of The WATER Institute’s Bring Back the Beaver Campaign, the winsome rodents act as “water engineers”. By building dams they harvest water and direct its flow, and the moist soil that surrounds the pools yields lush vegetation. Beavers, he says, serve as ecological “shock absorbers” so that land is less susceptible to drought and fire. Beavers are native to much of California, and were numerous prior to the early nineteenth century, when they were mostly wiped out. (Water-wise, California’s “fur rush” was a bigger deal than the Gold Rush.) Nationwide, today beavers number around 10 million, down from an estimated 200 million when Europeans arrived on our shores.

Now in the fifth year of an epic drought, Californians have explored ways to save water and wring it out of typical and atypical sources. The search has spanned the gamut from funding research, investing in expensive solutions like desalination plants, toying with the idea of recycling wastewater, imposing water-use restrictions, letting lawns go dry and experimenting with irrigation efficiency techniques for the crops that feed the country.

Thirsty crops, a burgeoning population and below-average precipitation have also led to seriously overdrawn groundwater sources that took a very long time to fill up. The state’s agricultural industry, which grows more than 250 crops, has also been vilified for its heavy water use.

Healthy soil that’s rich in organic matter has an ability to retain water that surpasses much more expensive solutions to the drought, yet not many people are aware of its potential to reduce farm water use.

“Name something that doesn’t come from the soil?” asked Tony Rolfe, a California state soil scientist with the Natural Resources Conservation Service (NRCS), a U.S. Department of Agriculture agency. “It’s not just food, but also your clothes that come from cotton, construction and homes that rely on wood, even oxygen because you need soil to grow the plants that take in carbon dioxide and give out oxygen.”

Feeding more than 7 billion people with minimal environmental and climate impacts is no small feat. That parts of the world are plagued by obesity while starvation is rampant elsewhere shows part of the problem revolves around distribution and social equity. But agricultural methods pose some of the biggest challenges.

Over the past half century, the world has moved increasingly to industrial agriculture—attempting to maximize efficiency through massive, often inhumane livestock operations; turning huge swaths of land over to monocrops requiring liberal use of fertilizers, pesticides and genetic modification; and reliance on fossil fuel-consuming machinery and underpaid migrant workers. This has contributed to increased greenhouse gas emissions; loss of forests and wetlands that prevent climate change by storing carbon; pollution from runoff and pesticides; antibiotic and pesticide resistance; reduced biodiversity; and soil degradation, erosion and loss.

The “solution” offered by many experts is to double down on industrial agriculture and genetic modification. But doing so ignores how natural systems function and interact and assumes we can do better. History shows such hubris often leads to unexpected negative results. Others are attempting to understand how to work within nature’s systems, using agroecological methods.

One promising development is the renewed interest in a soil-building method from the distant past called “dark earth” or “terra preta,” which involves mixing biochar with organic materials to create humus-rich soil that stores large amounts of carbon. In the book Terra Preta: How the World’s Most Fertile Soil Can Help Reverse Climate Change and Reduce World Hunger, Ute Scheub and co-authors claim increasing the humus content of soils worldwide by 10 percent within the next 50 years could reduce atmospheric CO2 concentrations to pre-industrial levels.

A new, seven-part video series explores how an increasing number of farmers throughout the country are creating a new hope in healthy soil by regenerating our nation’s living and life-giving soil.

The video series is designed to help consumers, educators and students understand some of the important principles and practices behind the growing soil health movement.

Adding carbon to the soil is critical to restoring health to the soil by increasing the organic matter content.

The good news is we now know how we can regenerate our soils and put the carbon back in the soil. This is a very simple process, but at the same time, also very difficult.

A healthy soil provides a healthy environment for these soil microbes. The microbes will provide the nutrient cycling of soil organic matter making nutrients available for the plants growing in the soil.

Stable aggregates that can infiltrate and store additional water can also lower our irrigation pumping requirements by improving soil water efficiency. Lowering our groundwater consumption is critical to stabilizing the currently rapid decline of our groundwater resource.

Imagine a world in which industrial crop production supports healthier air, water and soil; a time when rural communities thrive thanks to their local farms; a world where foods are rife with nutrients and the future of agriculture is a thing of beauty and promise …

This is the vision that grows within regenerative agriculture—a practice of farming, based on ecological principles, that builds soil health and recaptures carbon emissions from the atmosphere.

Regenerative agriculture is building on the principles and practices of organic to help communities and soil thrive. “There is an international movement afoot today that says it’s time to take things a step further,” says industry veteran Tom Newmark, founder and chair of Carbon Underground—a nonprofit dedicated to restoring soil health and helping to address climate issues. Regenerative Agriculture is that step, according to Newmark and a growing number of vocal advocates.

Many modern farming systems, which often include the use of heavy machinery, excessive tilling and harmful chemicals, disrupt the organic matter in the soil. Once the carbon molecules in the soil get exposed to the air, they combine with oxygen to create carbon dioxide, turning a natural carbon exchange system from healthy and fertile soil into a toxic atmospheric gas. These unnatural processes have sickened the living systems within the soil, and in many cases have cut off vitality completely—ruining the health and sustainability in all too many agricultural ecosystems.

The healthy side of dirt

In her recent book, The Soil Will Save Us (Rodale Press, Inc., 2014), author Kristin Ohlson writes about the relationship that plants have with microorganisms in the soil, and the impact that disturbing the soil through unnatural, modern methods is having on our food, our climate, our local communities and our future as a whole.

In a teaspoon of healthy soil, Ohlson says, there are billions and billions of microorganisms, all interacting with plants in a “complex and crucial” ecosystem. “Because it’s not visible to the naked eye, humans have only sort of become aware in the last couple of decades what’s going on down there,” she explains.

Organic carbon in soil is a reservoir for plant nutrients—those that are essential to the health of humans that consume them, as well as the ecosystem they are meant to thrive within. These nutrients include calcium, nitrogen, phosphorous, magnesium and micro-nutrients, which are released in the decomposition though microbial processes.

Carbon in the soil ensures these processes become a vital part of nutrient storage, soil structure, microbial activity, water retention, soil temperature and biodiversity—all elements that contribute to nutrient-rich soil and foods from that soil and the living ecosystem they sustain.

Known by scientists as agro-ecological farming, the principles of regenerative agriculture create healthy farms through practices such as crop rotation, cover cropping, composting and reduced tillage.

Healthy farms can be just as productive, if not more productive, than industrial farms, but are much better for the environment, the economy and the people who plant, harvest and eat the food.

Healthy soils are the basis for healthy food production. The most widely recognized function of soil is its support for food production. It is the foundation for agriculture and the medium in which nearly all food-producing plants grow. In fact, it is estimated that 95% of our food is directly or indirectly produced on our soils. Healthy soils supply the essential nutrients, water, oxygen and root support that our food-producing plants need to grow and flourish. Soils also serve as a buffer to protect delicate plant roots from drastic fluctuations in temperature.

What is a Healthy Soil?

Soils are under increasing pressure of intensification and competing uses for cropping, forestry, pasture and urbanization.  The demands of a growing population for food, feed and fibre are estimated to result in a 60 percent increase by 2050.  These pressures combined with unsustainable land uses and management practices, as well as climate extremes, cause land degradation. Soil preservation and sustainable land management have therefore become essential for reversing the trend of soil degradation and ensuring food security and a sustainable future. 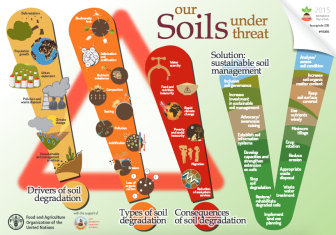