When we invited activists, authors, farmers, filmmakers and scientists from 16 countries to camp out with us at a hostel in Paris for the 2015 COP21 Climate Summit, we weren’t sure who would show up, or how things would go.

It turned out even better than we imagined. About 80 people, from Argentina, Australia, Canada, Colombia, Ecuador, France, Germany, Greece, India, Indonesia, Mexico, Peru, Switzerland, Spain, the U.S, and Zimbabwe joined us, for all or part of the two-week COP21, at St. Christopher’s Inn Canal, sister hostel of the Place to B. The hostel, and a nearby rented apartment, turned out to be great venues for formal, organized workshops, plus a lot of informal networking and ad hoc meetings.

We went to Paris with a message of hope: Regenerative food, farming and land use can cool the planet and feed the world. Our intention was to change the climate conversation because to date, the conversation has focused almost exclusively on emissions reduction. We absolutely must reduce fossil fuel emissions. But emissions reduction is only a 50-percent solution. Even if we were to cut all human-induced greenhouse gas (GHG) emissions today, the globe would continue to warm for decades or even centuries to come.

However, there is hope. There is growing scientific evidence that regenerative agriculture can reverse climate change by drawing carbon into the soil through the natural process of photosynthesis, while at the same time delivering other essential ecological, economic and health benefits.

Ronnie Cummins, international director of the Organic Consumers Association and Via Organica, and a member of the RI Steering Committee, told one gathering: 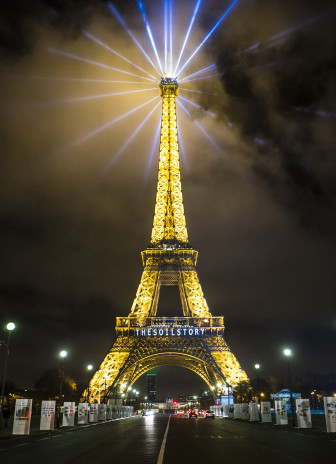 “A growing number of us here in Paris are determined to change the prevailing gloom and doom conversation on climate, and instead focus on practical solutions, Global regeneration requires a revolution, not only in our thinking, but in our heretofore tunnel vision. We need to move beyond mere mitigation or sustainability concepts that simply depress or demobilize people to a bold new global strategy of regeneration,” he added.

We accomplished our goal in Paris. We helped change the conversation. For the first time, the international community now recognizes the potential for healthy soils to reverse climate change.

On December 1, 2015, France launched a global initiative endorsed by 100 partners, including 25 countries. The “4 per 1000 Initiative: Soils for Food Security and Climate” consists of a voluntary action plan under the Lima-Paris Action Agenda (LPAA) that aims to show that food security and combating climate change are complementary. The initiative also positions farmers as the pioneering climate heroes of our generation.

“We know we can put carbon in the soil. The world has accepted it. Now we have to talk about how to scale this up. What we are about to do now is change agriculture forever. It is the biggest paradigm shift in the history of the climate change movement. On December 1-2, agriculture finally made it into the climate talks. It went from being ignored to being central to climate change. This is huge. The time for talking is finished. Now is the time for doing. The technology is available to everyone. It is up to us to mobilize in time. Let’s start working to get this done and give our world a better future.”

The words “agriculture” and “soil carbon” do not explicitly appear in the official UNFCCC agreement. But that’s okay!  Here’s why. Each country is required to provide something called an Intended Nationally Determined Contributions (INDCs), a document in which they outline their plan for climate mitigation and adaptation. According to an analysis conducted by CGIAR of the first 150 country INDCs submitted ahead of the UN climate talks, 80 percent of commitments included agriculture in mitigation targets, and 64 percent included agriculture in their adaptation strategies.” Under the Lima-Paris Action Agenda, these INDCs will be reviewed every five years and do not begin until 2020.

“It is important to understand that there is plenty of scope to have farming and soil carbon included in the INDCs between now and 2020,” Leu said.

In addition to attending the formal COP21 negotiations, the RI delegation participated in and hosted a variety of alternative events, workshops and demonstrations.

Here’s a list of some notable events RI members either organized, sponsored or participated in:

What can you do?

(1) Change the climate conversation in your local community or in your local organization from doom and gloom to one of positive solutions, based upon the regeneration perspective. Join Regeneration International’s Facebook page. Publicize and share strategic articles, videos and best practices. If you need to study up on how soil sequestration works, read and re-read this pamphlet and go through the major articles in our annotated bibliography.

(2) Join or help organize a local or regional regeneration working group. If you’re ready to become a Regeneration International organizer send an email to info@wordpress-409503-1481076.cloudwaysapps.com.

(3) Boycott the industrial food system. Regenerate your health and your diet. Get ready to join OCA and Regeneration International’s soon-to-be-announced global campaign and boycott against Monsanto, factory farms, GMO animal feeds, biofuels and so-called “Climate-Smart Agriculture.” One of the most important things you can do today and every day is to buy and consume organic, grass-fed, locally produced, climate friendly foods.