The Earth loses roughly 23 billion tons of fertile soil every year. At this rate, all fertile soil will be gone within 150 years, unless farmers convert to practices that restore and build soil organic matter, an essential component of soil fertility.

Many industrial agricultural practices are lethal to soil fertility, including deforestation and burning, and excessive use of synthetic fertilizers and other toxic chemicals. One of the biggest contributors to soil degradation is the common practice of soil tilling. Fortunately, a growing number of farmers realize the importance of preserving and improving their soil by adopting no-till practices. 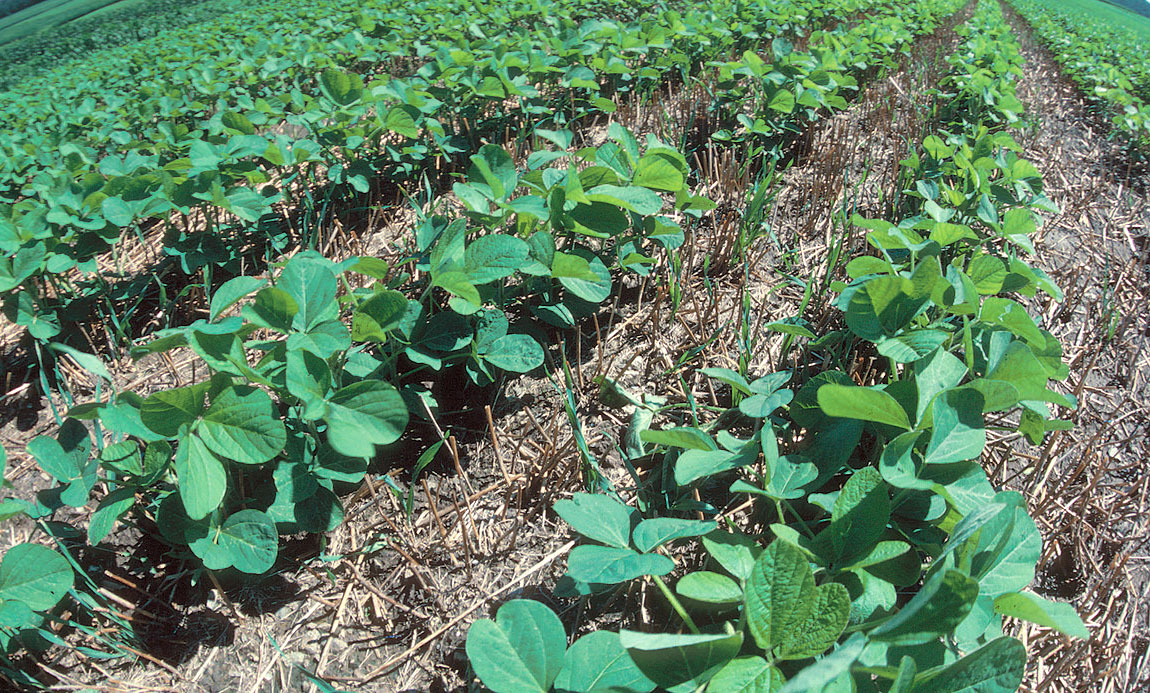 Young soybean plants thrive in the resiue of a wheat crop. This form of no till farming provides good protection for the soil from erosion and helps retain moisture for the new crop. Photo credit: USDA NRCS Photo Gallery

The invention of the plow—progress or problem?

No-till farming is nothing new. It was used as far back as 10,000 years ago. But as plow designs and production methods improved during Europe’s Agricultural Revolution in the 18th and early 19th centuries, tilling became increasingly popular. Farmers adopted the method because it allowed them to plant more seeds while expending less effort.

Tilling involves turning over the first 6 – 10 inches of soil before planting new crops. This practice works surface crop residues, animal manure and weeds deep into the field, blending it into the soil. It also aerates and warms the soil. Sounds like a good thing, right? Unfortunately, in the long run, tilling does more harm than good. Here’s why.

Tillage loosens and removes any plant matter covering the soil, leaving it bare. Bare soil, especially soil that is deficient in rich organic matter, is more likely to be eroded by wind and water. Think of it this way: Undisturbed soil resembles a sponge, held together by an intricate structure of different soil particles and channels created by roots and soil organisms. When the soil is disturbed by tilling, its structure becomes less able to absorb and infiltrate water and nutrients.

Tilling also displaces and/or kills off the millions of microbes and insects that form healthy soil biology. The long-term use of deep tillage can convert healthy soil into a lifeless growing medium dependent on chemical inputs for productivity.

The case for a no-till farming future

From a soil perspective, the benefits of no-till farming far outnumber those of tillage-based systems. No-till practices allow the soil structure to stay intact and also protect the soil by leaving crop residue on the soil surface. Improved soil structure and soil cover increase the soil’s ability to absorb and infiltrate water, which in turn reduces soil erosion and runoff and prevents pollution from entering nearby water sources.

No-till practices also slow evaporation, which not only means better absorption of rainwater, but it also increases irrigation efficiency, ultimately leading to higher yields, especially during hot and dry weather.

Soil microorganisms, fungi and bacteria, critical to soil health, also benefit from no-till practices. When soil is left undisturbed, beneficial soil organisms can establish their communities and feed off of the soil’s organic matter. A healthy soil biome is important for nutrient cycling and suppressing plant diseases. As soil organic matter improves, so does the soil’s internal structure—increasing the soil’s capacity to grow more nutrient-dense crops.

It’s clear that adopting no-till practices is good for the soil. But what’s in it for the farmer? Remember, tilling became popular because it meant farmers could plant more seeds, faster. Modern no-till tractor implements allow farmers to sow seeds faster and cheaper than if they tilled their fields. Conventional tillage practices require the farmer to make several passes over the field, first tilling the soil and then returning to plant seeds. No-till removes the step of tilling the soil and therefore saves the farmer time and money. According to a report published in Scientific America, this decreases the fuel expense by 50 to 80 percent and the labor by 30 to 50 percent.

One of the common misconceptions about no-till farming is that farmers can use this practice only if they grow genetically engineered (GMO) crops, which require the use of herbicides. To clear up this confusion, it’s important to understand that there are two types of no-till farming: conventional and organic.

In conventional no-till farming, farmers use herbicides to manage the weeds before and after sowing the seeds. The amount of herbicides used in this approach is even higher than the amount used in tillage-based farming, which causes a threat to the environment and human health.

Organic no-till farming uses a variety of methods to manage weeds and reduce or eliminate tillage without resorting to the use of chemical herbicides. These methods include cover crops, crop rotation, free-range livestock and tractor implements such as the roller crimper, which farmers can use to lay down a weed-suppressing mat that can be planted through in one pass.

Organic no-till farming on its own isn’t an all-cure solution to the world’s soil crisis. But it’s one of the many important practices that move us toward a regenerative agriculture model that is better for human health and the environment.

How no-till farming fits into the bigger climate solution

Until recently, the “how do we solve global warming” conversation focused almost exclusively on the need to reduce greenhouse gas emissions. It’s absolutely critical that we do that, and that we do it fast.

But it’s equally, if not more critical, that we figure out how to draw down the carbon that’s already in the atmosphere. Thankfully, climate scientists now recognize that healthy soil plays an essential role in drawing down and sequestering carbon.

According to Rodale Institute, adopting regenerative agricultural practices across the globe could sequester global annual greenhouse gas emissions, which is roughly 52 gigatonnes of carbon dioxide.

Where does no-till farming fit into the carbon sequestration story?

Soil naturally stores carbon. When soil is plowed under, carbon, in the form of organic material such as plant roots and microorganisms, rises to the soil’s surface. This temporarily provides nutrients for crops. But as the soil carbon is exposed to oxygen in the atmosphere, it transforms into carbon dioxide, contributing to the greenhouse gas emissions that warm the planet.

No-till farming minimizes soil disturbance, which helps keep carbon in the soil. It also enriches soil biodiversity, reducing the need for chemical fertilizers that emit greenhouse gases. Studies have shown that organic no-till practices, when combined with cover cropping and organic management, help increase soil organic carbon by up to 9 percent after two years and 21 percent after six years.

No-till practices, when combined with other regenerative methods, such as cover cropping, agroforestry and the rotation of multispecies livestock, can help establish truly regenerative and climate-resilient farms.

Read next: Why Regenerative Agriculture?