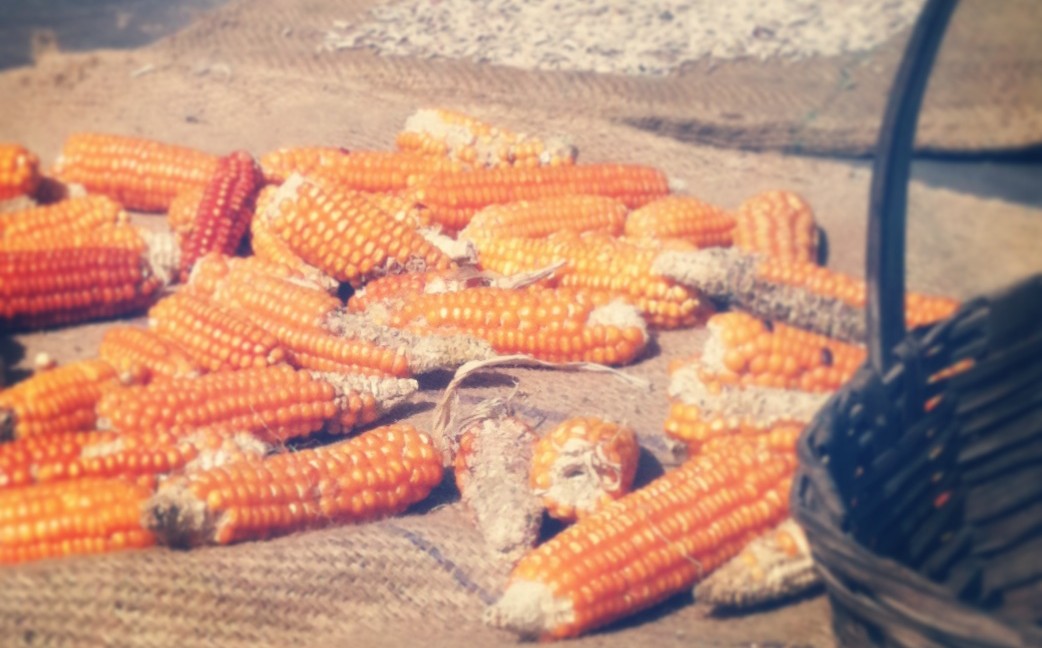 During the last half-century, agriculture and food systems lost their way, in the darkness and fog created by corporations that made chemicals for warfare, through myths and paid propaganda – that poisons and synthetic chemicals are necessary to feed the world. For the industry it was a matter of extending their sources of profits long after the war was over. For the planet and people, the costs have been tragically high. 75% of the earth’s biodiversity, soils, water have been destroyed, the climate has been destabilised, farmers have been uprooted, and instead of nourishing us, industrial food has become the biggest cause of disease and ill health.

For all the destruction it causes, the industrial food system produces only 30% of the food eaten by people. If we travel further down that road, we will have a dead planet and no food.  We can not eat propaganda; We eat soil, we eat water, we eat biodiversity. And when these vital resources are destroyed, our food security is destroyed.

There is, however, another road to food security. The road that was abandoned by research institutes and governments under the influence of giant chemical corporations (now seed and Biotechnology Corporations). This is the road of agroecology .This is the road with small farms, which still produce 70% of the food in spite of a century of a war against small farms. This is the road that rejuvenates our soils, biodiversity and water systems, that stabilises the climate, that produces health and well being . It is not a road less travelled when looked from the perspective that most people in the world are small farmers, that small farms produce most of the food we eat. Small farms also strengthen local economies instead of extracting profits for the few.

It is only less travelled in the dominant paradigm, in the fantasy created by corporations to sell their poisons and patented GMOs. In reality, good farming, which produces good food, is based on the care of the soil and on the intensification of biodiversity and ecological processes. An industrial model of food production is neither efficient nor sustainable. It is not efficient because it uses ten units of inputs – largely fossil fuel based – to produce one single unit of food. This ineffective and inefficient system is destroying ecosystems and the planet, as well as creative, meaningful and dignified work in agriculture. This is why it is not sustainable. It eats into the ecological foundations of agriculture.

Even tough the evidence is clear that ecological farming produces more and better food, using fewer resources, and rejuvenating soil, biodiversity and water in the process, corporate spin doctors continue to fog our thinking about the future of food and farming with new propaganda – “sustainable intensification”, “smart agriculture”, “climate smart agriculture”. This is nothing more than spin, another attempt to hide the failures of their technology and a push to keep agriculture addicted to their toxic, and carcinogenic, chemicals. Dependence on toxic chemicals and GMOs is ecologically and economically non sustainable for the earth and people.

It is ecologically non sustainable because it is destroying soil integrity and soil fertility. Any agriculture system that destroys fertile soils is non sustainable because soil is the foundation of agriculture. Contrary to PR claims, industrial monocultures use more land to produce less food, bad food. They produce nutritionally empty commodities, most of which go to biofuel and animal feed. Only 10% of the corn and soya is used directly as human food. This is not, by any stretch, a food system.It is also economically non-sustainable because it is based on 10 times more costs of inputs- such as chemicals fertilisers, pesticides, herbicides, and GMO and nonrenewable seeds – than the returns farmers are getting from what they produce. It is designed to trap farms in debt, remove them from the landand appropriate their assets. And it is not working . A recent example is the failure of 60% of the Bt cotton in Punjab driving 15 farmers to suicide.[1]

Pesticides and GMO Bt Cotton were supposed to control pests. Instead they have created new pest epidemics never seen before. Pesticides and Bt are pest creating technologies, not pest control technologies. The excuse used to push Bt technology was pest control and reduced pesticide use – it has, quite clearly, failed miserably.

Organic farming is the alternative that gets rid of poisons and pests. On our recent Soil Pilgrimage we saw fields of desi organic cotton completely pest free -brimming, instead, with life. The Punjab experience of failure of Bt should help in the transition to an Organic India 2020. And it should stop the insane proposal of putting Bt in straight varieties, which will endanger resilient native varieties by putting the pest creating trait into India’s desi varieties.

What is being referred to as “Smart Agriculture” and “Climate Smart Agriculture” is designed to make farmers and society dumb by giving up their intelligence, their knowledge, their skills, and then forcing them to buy “data” which becomes yet another external input leading to more dependence on corporations, more control bycorporations, and more failures in agriculture. Data controlled by distant, centralized systems is not the intimate knowledge of the soil, of the biodiversity, of farm animals that an ecological farmer has. After having caused epidemics of food based diseases, the players in the industrial food system are betting on Big data -pushing “Information Obesity”, not knowledge, not intelligence, which are both living, participatory processes. “Climate Smart Agriculture” is actually “Climate Stupid Agriculture”. It is the next hasty step down the road that leads to guaranteed destruction of the earth and society. And the stupidity is evident in Monsanto’s failing fortunes. Beyond a point, spin and bullying cannot sustain a business.[2]

“Climate Smart Agriculture”, and genetically modified crops are based on seeds pirated from third world peasants. As I have written in Soil, not Oil, 40% of the Green House Gas emissions come from an industrialised, globalised model of agriculture. Having contributed to the creation of the climate crisis, corporations who have profited from industrial agriculture are attempting to turn the climate crisis into an opportunity to control stolen climate resilient seeds and climate data, while attempting to criminalise Climate Resilient, Organic Agriculture. Monsanto now owns the world’s biggest climate data corporation and soil data corporation. Armed with proprietary big data, Monsanto intends to profit from the climate crisis which has already claimed thousands of lives. The worse it gets, the better it is for Monsanto; mitigating the crisis would not be profitable to climate deniers like Monsanto.

1500 patents on Climate Resilient crops have been taken by corporations like Monsanto. Navdanya/Research Foundation for Science, Technology and Ecology, have published the list in the report “Biopiracy of Climate Resilient Crops: Gene Giants Steal Farmers Innovation”.  With these very broad patents, corporations like Monsanto can prevent access to climate resilient seeds in the aftermath of climate disasters through patents – which grant an exclusive right to produce, distribute, sell the patented product. Climate resilient traits are not created through genetic engineering, they are pirated from seeds farmers have evolved over generations.

For thousands of years farmers, especially women, have evolved and bred seed – freely in partnership with each other and with nature, to further increase the diversity of that which nature has given us and adapt it to the needs of different cultures. Biodiversity and cultural diversity have mutually shaped one another over time.

Along coastal areas, farmers have evolved flood tolerant and salt tolerant varieties of rice – such as “Bhundi”, “Kalambank”, “Lunabakada”, “Sankarchin”, “Nalidhulia”, “Ravana”,”Seulapuni”,”Dhosarakhuda”. After the Orissa Supercyclone Navdanya could distribute 2 trucks of salt tolerant rices to farmersbecause we had conserved them as a commons in our community seed bank.

Every seed is an embodiment of millennia of nature’s evolution and centuries of farmers’ breeding. It is the distilled expression of the intelligence of the earth and intelligence of farming communities. Farmers have bred seeds for diversity, resilience, taste, nutrition, health, and adaption to local agro-ecosystems.  In times of climate change we need the biodiversity of farmers varieties to adapt and evolve. Climate extremes are being experienced through more frequent and intense cyclones which bring salt water to the land. For resilience to cyclones we need salt tolerant varieties, and we need them in the commons.

The Intelligent , responsible road to the future of food and farming is based on the deep awareness that the earth, the farmers, and all people are intelligent beings. And we grow food sustainably through care for the soil and the seed, not through exploitation and privatised profits. If we can look through the degenerate Public Relations Fog, we can find our way to the road that will ensure we rejuvenate the planet, we regenerate the soil, and we ensure the well being of all.